The Weight Of Light by Benoît Delbecq was released on February 13th and Beyond, the debut recording of Futari, a duo of pianist-composer Satoko Fujii and vibraphonist Taiko Saito was released on January 22nd. Both new releases that feature prepared piano, a method of extending and altering sounds by placing objects on or between the strings. This method was developed by John Cage for  Bacchanale in 1938 and further refined in the Sonatas and Interludes a decade later. John Cage said that the result was “to place in the hands of a single pianist the equivalent of an entire percussion orchestra … With just one musician, you can really do an unlimited number of things on the inside.”  In addition to Satoko Fujii’s prepared piano on Beyond vibraphonist Taiko Saito extends her instrument by using bows on the vibraphone to achieve sustained tones and harmonic overtones.

In the jazz world I can think of no one who has embraced this prepared piano method more fully and adeptly than Benoît Delbecq. In a 2005 interview by pianist Ethan Iverson, Delbecq speaks of musical influences and stating “…  it became serious around 1988 when I first practiced György Ligeti’s Etudes Pour Piano: I used prepared notes to reveal the multiple ‘hidden’ speeds and some articulations better. Soon after I listened to and performed John Cage’s Sonatas and Interludes. It felt like there was a door wide open to research new directions at the piano, and I started to write tunes that were including this idea of improvised polymetrics, with combinations of rhythms and melodic fragments expressed in different layers.” In that same interview he mentions that he seeks out and collects objects from his travels to use for preparing piano.

My first exposure to prepared piano was at the Minnesota sur Seine 2005 festival which opened its first night with a concert of solo prepared piano by Benoît Delbecq at Minneapolis’ Alliance Française. It was an intimate space where I was able to observe how meticulously Delbecq attached the pieces of wood and other objects from his collection inside the piano. As a painter prepares his palette for a particular painting, the pianist must prepare his piano for a particular composition. During the performance I was spellbound by the unfamiliar sounds coming from the piano with the prepared strings providing percussion and the other strings supplying the melodic lines. It was amazing that the whole sound was produced by only one musician.

The Weight of Light (Pyroclastic Records) 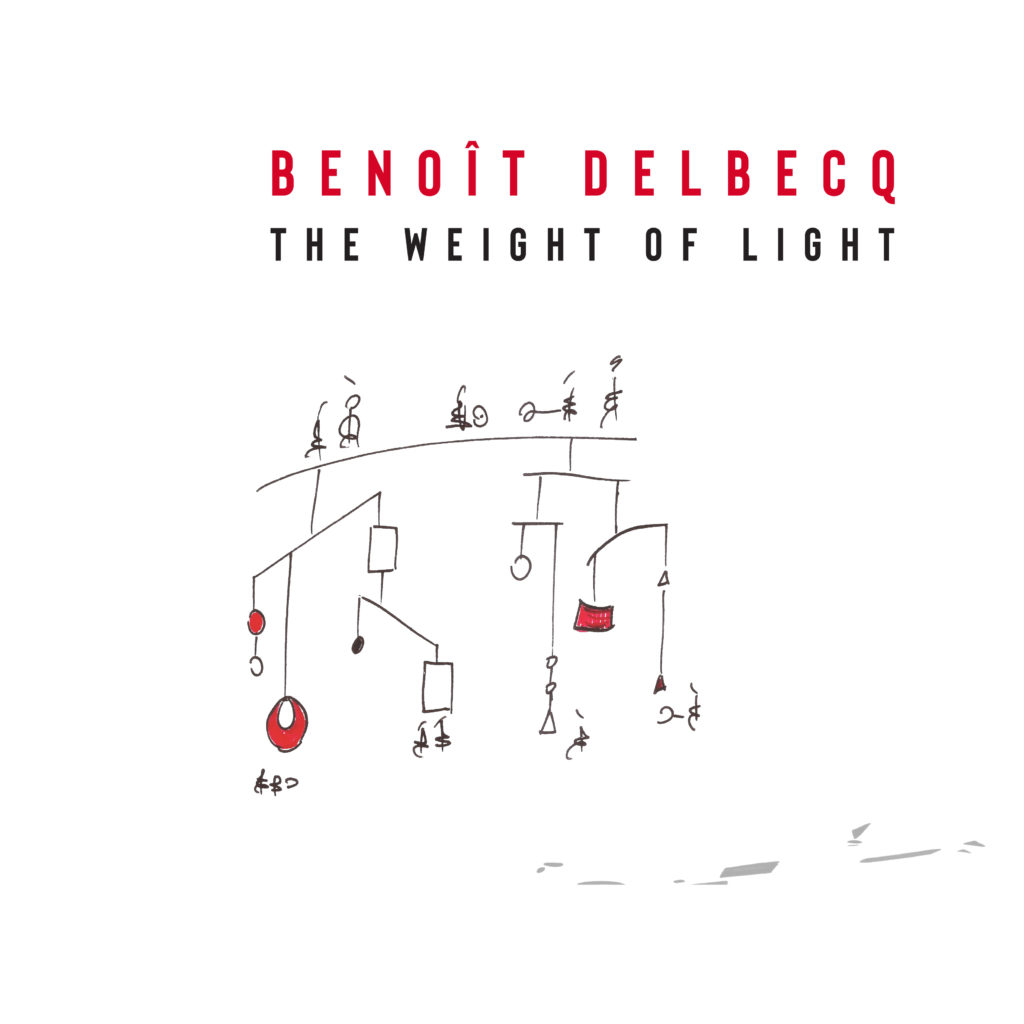 Benoît Delbecq drew the image that would become his album cover for The Weight of Light based on a childhood memory when he had watched the dancing shadows cast from a mobile that hung in his parents room. That memory also inspired the compositions on this album. As the mobile’s arms each move with their own rhythm, the relationship between time and space is played out in those shadows. Likewise Delbecq’s competitions explore polyrhythmic interplay between left hand loops and seemingly independent melodic lines. The album begins with “The Loop of Chicago” which employs a looping rhythm with the sound of gamelan instruments while the naked piano keys dance in sporadic flurries of melody. The third track “Family Trees” uses the same technique and the percussion is more dominant and hypnotic with occasional teasing pauses (listen to “Family Trees”). The mood varies wildly from track to track and often within a tune as well from dark and brooding to bright and playful. We have waited over a decade for another solo release from Benoît Delbecq and this enchanting album was worth the wait.

Track listing for The Weight of Light:

Avant-garde composer, pianist, arranger, and bandleader Satoko Fujii is known for the variety and complexity of her compositions and the ferocity of her playing.  She began playing piano at age four, studying classical music until she was 20. She then started to study jazz and in 1985 she was awarded a scholarship to the Berklee School of Music. Upon graduating from Berklee she returned to Japan where she played many of Japan’s major jazz clubs and worked as a session musician and teacher. She returned to the U.S. in 1993 to study at the New England Conservatory of Music, where her teachers included George Russell, Cecil McBee, and Paul Bley with whom she recorded her stunning debut album Something About Water. She has since recorded about a hundred other albums in duos, trios, small ensembles, and orchestras. A constant innovator,  her body of work is varied from songs based on simple folk melodies to complex abstract compositions.

Award-winning mallet player-composer Taiko Saito was born in Sapporo but currently lives in Berlin. She studied with marimba virtuoso Keiko Abe and studied classical marimba and percussion at the Toho School of Music. In 1997 she began to improvise and to write music, and moved to Berlin, where she studied vibraphone and composition with David Friedman at the Universität der Künste Berlin. In 2003 she founded the marimba/vibraphone-piano duo with German jazz piano player Niko Meinhold. She is a founding member of the Berlin Mallet Group, which also includes her former teacher Friedman. 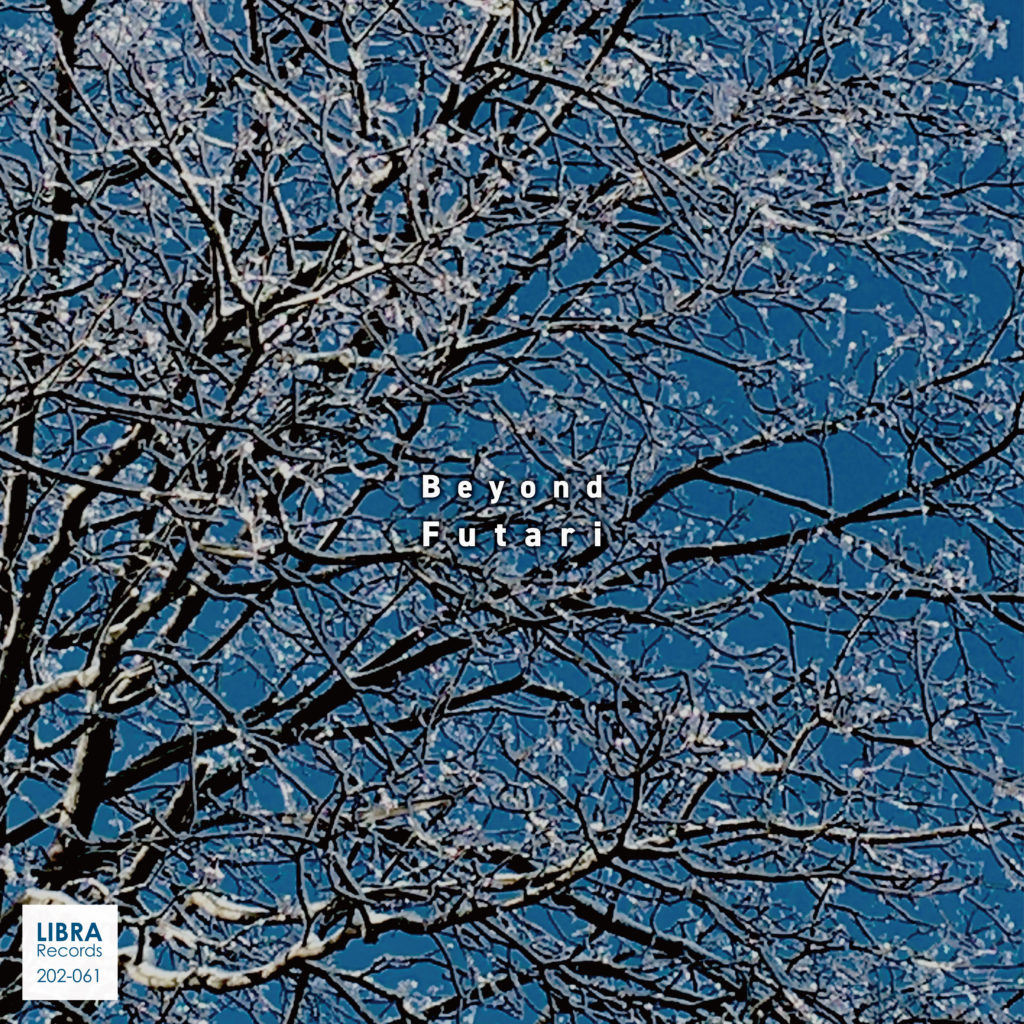 yond, the recorded debut of Futari, a duo of pianist-composer Satoko Fujii and vibraphonist Taiko Saito was released on January 22nd.  Having met many years before in Berlin Satoko Fujii teamed up with Taiko Saito to form the duo Futari (meaning two people) for a brief tour of Japan. They recorded the music they had been performing after their fourth performance at the Oda Community Center “Subaru” Concert Hall in Ichiko, Ehime, Japan on June 26, 2019.

The opening track “Molecular” has the haunting beauty of the pulsing bowed vibraphone punctuated by percussive drops on the prepared piano. The serene  “Todokanai Tegami” is my favorite track on the album, having so much space in the interactive improvisations.  By the fifth track, “On the Road” the roles have slightly reversed with the piano sustaining tones while the malleted vibraphone provides the initial percussive melody. The whole album has an organic feel invoking images of falling water. At times the sound is like what you might hear on a frozen lake when the ice starts to crack. This album sounds like nothing else.  Listen to a sample or purchase download on Bandcamp.

Track listing for Beyond