[From IJD and JAM press releases] 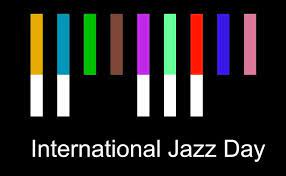 Leading performances from their home countries will be Igor Butman in Moscow (Russia), Jacob Collier in London (United Kingdom), Mandisi Dyantyis in Cape Town (South Africa), Ivan Lins in Rio De Janeiro (Brazil), John McLaughlin in Monaco, James Morrison in Mt. Gambier (Australia), and Junko Onishi in Tokyo (Japan), among others. Renowned Beninese vocalist Angélique Kidjo will contribute a special performance from UNESCO Headquarters in Paris. The concert will be presented as a live webcast via YouTube, Facebook, jazzday.com, UN Web TV, UNESCO and U.S. State Department outlets. Following this historic program, viewers across the United States can tune in to the International Jazz Day 10th Anniversary Celebration on PBS for an unforgettable look back at the past decade of International Jazz Day celebrations, made possible by Toyota, the 2021 Lead Partner.

April is also recognized as Jazz Appreciation Month (JAM), a music festival held every April in recognition of the significant contribution that jazz music has made to society. The aim of this annual event, sponsored by the Smithsonian Institution, is to pay tribute to jazz for its historic and cultural significance by encouraging schools, governments and organizations to participate in various events such as free jazz concerts and educational programs.

JAM was first established in 2001 by John Edward Hasse, a curator at the Smithsonian National Museum of American History. It was initially funded by the Ella Fitzgerald Charitable Foundation, whose archives are currently housed at the Smithsonian. Through jazz-focused events, JAM works to support today’s jazz scene and encourage an appreciation of jazz music in people of all ages. Throughout the month of April, people will be encouraged to participate in jazz activities such as studying jazz music, attending jazz concerts, reading books, or just simply listening to good jazz music on the radio.  Additionally, over the past year, the Smithsonian has celebrated the contributions of women in jazz, from the genre’s earliest development to present successes and challenges. This year, Jazz Appreciation Month will both recognize and explore the historical legacy of pianist, singer, songwriter, storyteller, and civil rights activist Nina Simone with new historic content added to the website as well as online programming. See https://americanhistory.si.edu/smithsonian-jazz/jazz-appreciation-month