By Ryan Garmoe
Since 2019, something special has been happening every Tuesday evening in Northeast Minneapolis. Jazz musicians gather, share some drinks, and ultimately play tunes from 10pm-1am at Whitey’s Old Town Saloon on the corner of Southeast 4th and East Hennepin.  Spearheaded by local bassist, bandleader, and Brazilian jiu-jitsu aficionado, Graydon Peterson, the Old Town Jam has evolved from a local secret into a regional affair.
Jams can be a perplexing expression of the jazz tradition. How do musicians who have never played together perform songs with no rehearsal or music to read? The answer is that most jazz musicians actually share a common repertoire of ‘standards’ or frequently played songs. Because of this shared knowledge of tunes, musicians are able to play together without substantial planning. This setting allow younger musicians to learn from older ones and for everyone to cut their teeth or demonstrate what they’ve been practicing. Jams were actually one of the first methods of jazz education back in the early 20th century! Jams are also social; musicians can meet other players on the scene and potentially develop lasting professional and personal relationships.
Peterson’s Old Town Jam also has social origins. Before Covid-19, musicians playing big band night at the adjacent Jazz Central Studios would frequent Whitey’s in-between sets or for after the gig. Peterson thought Whitey’s bar, food, and built in jazz crowd would lend itself perfectly to another jazz jam. After getting to know management at the bar he proposed a Tuesday jam and was off to the races. 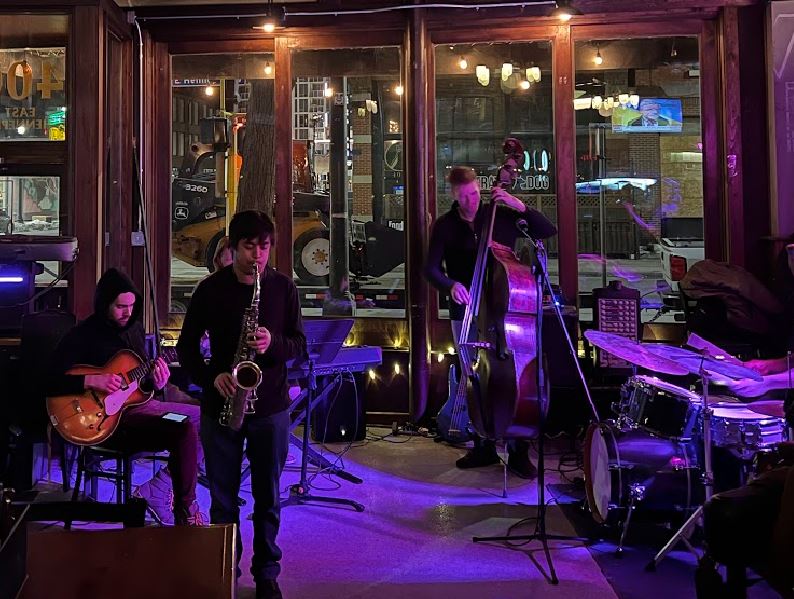 As expected, things started slow. Peterson would originally have to plug the jam in between big band sets, attempting to drum up more of a crowd for the evening’s next event. It took a few years, but Peterson now credits the jam’s growth to weekly consistency, positive word of mouth, and buy in from local musicians. Amazingly, he only took 1 week off due to Covid-19! From the beginning, it’s been important to Peterson that musicians and audience members can rely on the consistency and quality of the event; that’s what keeps people coming back. Whitey’s patio, nice drink list and good food helps with that too.
On any given Tuesday it’s no surprise to see a cadre of students carpool from the University of  Wisconsin Eau Claire or a certain wiz-kid high schooler from Fargo cut it with the Twin Cities’ best. Peterson is also excited for tours to pick up again, as  before the Pandemic, the jam was a frequent hot spot for visiting jazz musicians who had finished their first gig. The biggest signal of the jam’s growth, however, could be the presence of non-jazz musicians at the event. Multiple jam-goers have approached Peterson to say they are there only to listen to this one of a kind event.
Most of all, the Old Town Jam is a labor of love. The house band doesn’t get paid that much and Peterson spends an extra hour, sometimes more, on either end of the event to set up and tear down. 5 hours of extra work every single Tuesday is nothing to laugh at! Peterson needs to block off his Wednesday mornings to catch up on sleep and recover, adding to the already hectic schedule of a professional artist.  Through Peterson’s efforts, the jam is in a good spot. His event successfully weathered the pandemic, management at Whitey’s Old Town Saloon is happy to host the jazz community one night a week, and musicians are ecstatic they have another place to hang and play.
Next time you’re in the neighborhood on a Tuesday, stop in and check out the Old Town Jam. You’ll likely hear some of the best local jazz musicians and maybe gain a different perspective on jazz musicians themselves. Jazz truly is a social music! While you’re at it, take note of Graydon Peterson and the fine event he curates for the benefit of the community. If he doesn’t have a drink in hand, he truly deserves one. If he does, you’ll just have to go back next week.