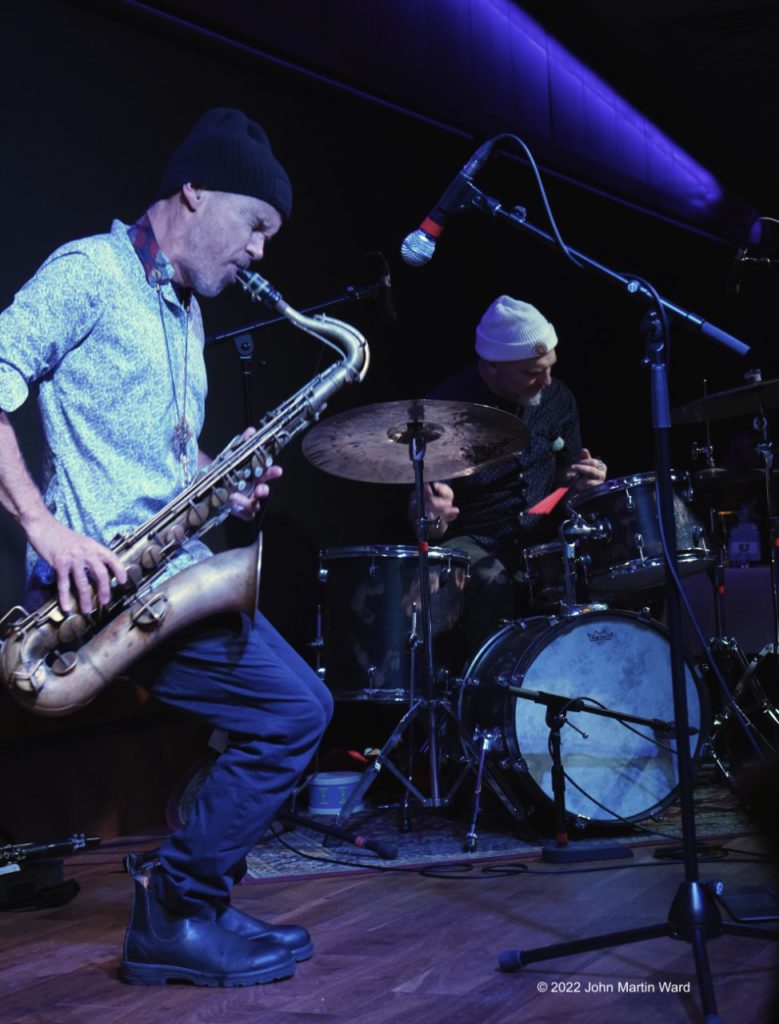 Saxophonist-composer Chris Speed, drummer Dave King and upright bassist Chris Tordini have played off and on as a trio since 2013, along with performing in various other groups. Saturday night’s (April 30) performance in the Dunsmore room at Crooners Supper Club was booked as a trio performance.

But there was an unforeseen change in plans.

After a performance in Chicago the previous night, Tordini was stricken with stomach flu, preventing him from taking the stage on Saturday. (Testing ruled out Covid as the cause of his illness.) So, Speed performed as a duo, without the benefit of a bass player to play through the changes. Fortunately Speed and King were up to the improvisational challenge, turning in a performance that kept the audience interested from start to finish.
Speed has expansive musical interests, composing and playing music ranging from jazz through various forms of folk, classical and rock music played in a wide variety of improvising ensembles.
A Seattle native, Speed moved to Boston in the late ’80s, attending the New England Conservatory. He also co-founded the group Human Feel, along with bass clarinetist/altoist Andrew D’Angelo, guitarist Kurt Rosenwinkel, and drummer Jim Black. Combining elements of free jazz, chamber music, and alternative rock, they released several albums between 1992 and 2019. Speed also picked up elite-level experience touring with the Artie Shaw Band (led by Dick Johnson). In the early ’90s, Speed moved to New York City, where he started working with saxophonist Tim Berne and his band Bloodcount.
Since then, Speed has been one of the more prolific and active improvisers on the New York scene, where much of the stylistic evolution of jazz has historically been rooted. He’s been part of combos blending elements of East European folk music, rock, jazz and other elements. One of those bands has been Yeah NO, Speed’s band with percussionist Jim Black, bassist Skuli Sverrisson and trumpeter Cuong Vu, which toured the States and Europe and made four recordings from 1997-2004.
Speed has also been active with The Clarinets, an ongoing collaboration with Oscar Noriega and Anthony Burr, making acoustic music that combines composed chamber music and experimental improvisation.
Speed and King also play in the group Broken Shadows, along with Bad Plus bassist Reid Anderson and Tim Berne. They released a debut album of original music in 2019.
Last August, Speed, along with guitarist Ben Monder, joined The Bad Plus (with Reid Anderson and Dave King). Their new album is scheduled for release in the fall. Speed has also had an influence on new music as a record label owner. His label Skirl Records has developed a catalog of more than 50 albums of new music by Brooklyn based musicians, since 2006.
Both Speed and King are prominent among the modern musicians who have been helping keep creative improvised music, aka “jazz” moving forward, rather than stagnating and becoming a museum piece.
Speed is a prolific composer; he sometimes writes tunes “where the meter is a little bit of a challenge,” he said in an interview. “But I don’t want it to sound difficult.” King and Tordini are always up to the challenge of making the music sound unforced and “sounds like they are having fun” playing it, he says.
King and Tordini “are the best musicians I’ve been able to play with,” Speed says. “They’re always willing to take risks and ‘push’ the music so even if it is a standard, it will sound like new music.
“The more you play together, the more you develop a common language; they’re in it for the long haul,” Speed says of King and Tordini. He notes that King is very adept at carrying on a musical dialogue with the other players while “keeping it together. He makes choices based on the mood of the song, and he can go from bombastic to subtle. And interact in a way that is always musical and fun. And he keeps me on my toes.”
At Crooners, Speed and King played their set in the Dunsmore Room, the kind of quiet, a chamber-music like venue ideal for music which rewards close, focused listening; that was the case Saturday night as Speed and King carried on a musical dialogue that kept the audience’s attention for the whole, roughly 70-minute set. The duo played mostly Speed compositions, including some new music they premiered in Brooklyn and recorded last week for an upcoming album, which will be their fourth project together.
Like a number of other saxophonists o 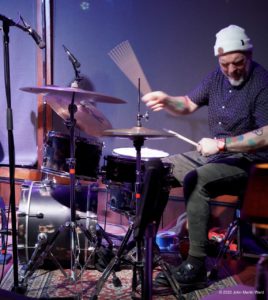 n the current scene, Speed is steeped in the history of jazz sax. Some of his melodic figures evoke the sound of the great Sonny Rollins – pretty much an inescapable influence for tenor saxophonists – but Speed has had no trouble establishing his own musical identity. On one tune, he favored a softer, Charles-Lloyd-like sax tone.
King is one of the most unorthodox drummers in jazz, even though he possesses all the technical skills of a great “mainstream” jazz drummer. It’s his departure from jazz drumming norms that makes his playing consistently interesting and often surprising; every move he makes seems to be serving the interests of whatever tune is being played, with dramatic body English that’s interesting to watch. And the sense of playfulness that is one of his most obvious traits is always in evidence. He’s been known to augment his drum kit with various children’s percussion toys, like a shiny plastic apple. (One of his “other” bands is called Happy Apple.)
King’s playing at Crooners seemed to contain the right combination of the bombast and subtlety that Speed mentioned, heavy on the latter.
One of the Speed compositions played in the set started with an extended, octave-leaping sax intro, before King joined in with some high-hat patter. Throughout the set, he laid down grooves that were a perfect match for Speed’s sax phrasing and melodic permutations.
Late in the set, Speed picked up his clarinet for a couple of his instrumental pieces; he recently released a solo clarinet album. Speed brought the volume down to pin-drop level and King matched that with some quiet, precise work with his brushes, and also a mallet.
Dan Emerson is a writer and musician.