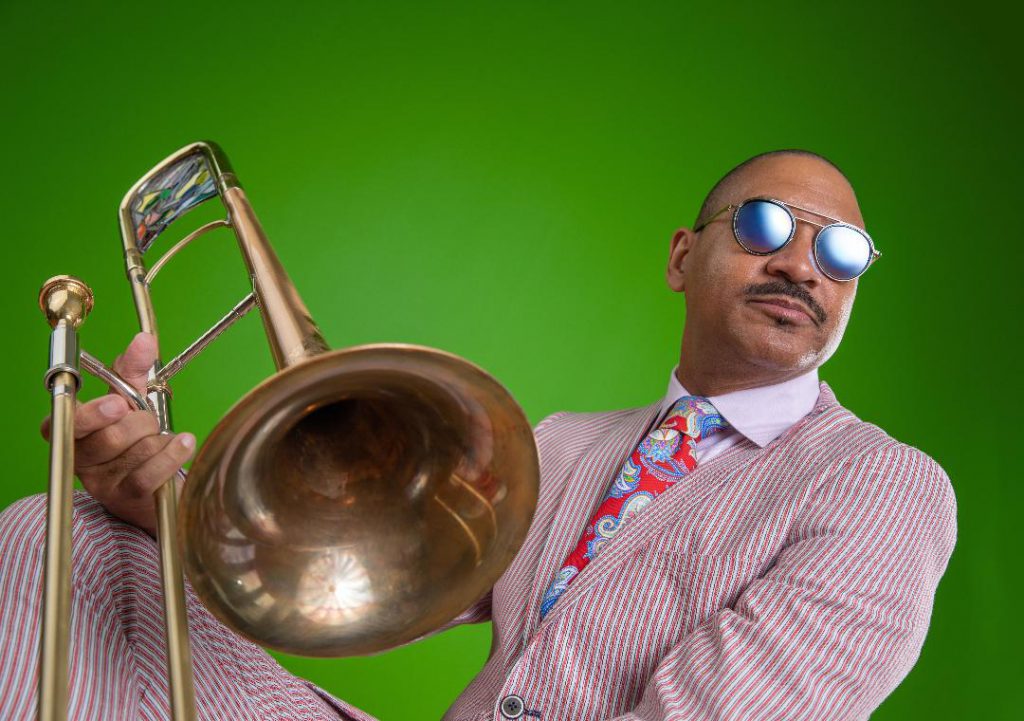 A press release said the following:

“My dad dedicated his life to growing and promoting New Orleans musicians,” said Marsalis. The legendary New Orleans pianist Ellis Marsalis who succumbed to Covid-19 on April 1, 2020 at the age of 85. “Today, the global health pandemic presents a threat to New Orleans’ culture bearers like none before. No less than our centuries-old musical heritage is at risk. With all performance venues shut down indefinitely and the musical tourism industry boarded up, our artists are struggling with both professional and financial uncertainty. Keep NOLA Music Alive was organized to fill a huge void.”

Several students on video sent birthday wishes to Delfeayo and thanked him for all the things he taught them. Then there was a toast to Marsalis’ 55th (Double-Nickel) birthday, and the Uptown Jazz Orchestra went right into an exciting “I’m So New Orleans,” followed by an energetic “Put Your Right Foot Forward.” Delfeayo said, “Happy Sunday, everybody, and we’re delighted that you have chosen to join us for our special birthday bash. This is our grand opening, I guess officially, of our Keep New Orleans Music Alive initiative, and we hope that you’re going to be able to help support our local New Orleans musicians so they can keep making people happy for many years to come. Marsalis introduced the members of the Uptown Jazz Orchestra, trumpeters John Gray, Scott Frock, Andrew Baham, and Dr. Brice Miller, Gregory “Speedo” Agid on tenor saxophone and clarinet, saxophonists Roger Lewis, Khari Allen Lee, Trevaris Huff-Boone, Reverend Roderick Paulin, Jerrone Ansari, Scott Johnson, Joseph Dyson, Jr. on drums, David Pulphus on bass, Ryan Hanseler on piano, and trombonists Christopher Butcher, “Miracle Mo” Maurice Trosclair,  T. J. Norris, and Terrance “Hollywood” Taplin. They kept things going with the hot and swinging “Br’er Rabbit.” In honor of the auspicious occasion, the group performed “The Double-Nickle.” Next came Louis Armstrong’s “Basin Street Blues” which was sung with real feeling by John Gray. The band really got down on the Dirty Dozen Brass Band’s “Snowball.”

Between songs, Delfeayo told several amusing anecdotes, and he seemed to be in the best of moods. He said, “We’re in a party frame of mind, and we got the songstress, the diva of the Crescent City, talking of course about the magnanimous and the wonderful, Ms. Tonya Boyd-Cannon.” Coincidentally, it was also Tonya’s birthday, and the orchestra played a soulful rendition of “Happy Birthday” to her, while she played the tambourine. Then she and the group performed a smoking-hot song about an all-night party that really had the joint jumping. Next came a change of pace, and Marsalis discussed The Great Slave Revolt of 1811, and the song they composed in recognition of that event. “It’s one of those situations, historically, where you know, the folks took a stand, and nobody survived. But what they represented was very important, and that is the type of spirit we’re trying to show today. +We got a lot of toughness out here with this pandemic, and we’re not sure what’s gonna happen, or when it’s gonna end, but you know, we gotta just maintain and stay the course.” The song was “The Valley of Prayers,” and Tonya Boyd-Cannon really sang her heart out on this driving and socially conscious composition. 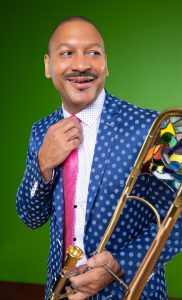 There were a couple of jests when Delfeayo asked if any of the musicians wanted to say something nice about him, in honor of is birthday, and there were several funny excuses. Marsalis said in response to the hilarity, “Alright, well, so much for that!” He continued, “Ten years before there was an Uptown Jazz Orchestra, there was an Uptown Music Theater. We started that on a whim. The kids had contacted us, and they were interested in having some theater program, and we’ve been running that for 20 years. So, we couldn’t have them here today, but we decided that we’d showcase them in a video where they learned a Charlie Parker composition entitled “Yardbird Suite,” and maybe, hopefully, they may have something nice to say! Let’s get to the Uptown Theater kids, and see what they have going. Now these kids are award-winning, they’ve gone to competitions and hoisted trophies, but more importantly, they’re very studious…excellent grades in school, and they’re actually really cool. So, let’s go to the video, see what we got!” The students indeed had many nice things to say, including birthday wishes and thanks for all the music lessons they learned from Marsalis. Then more than a dozen students sang a superb a cappella rendition of “Yardbird Suite.”

Then, all the musicians raised a glass and toasted Delfeayo. Terrance “Hollywood” Taplin said, “We’re going to raise our glasses up to this fine gentleman who brought us all here together. We’ve been all around the world, having some great times, fellowshipping, and let’s have another 55 more years!”  This was followed by a heartfelt performance of “Happy Birthday” with some great piano licks, then the group leapt right into the high-spirited “Uptown Boogie.” The Uptown Jazz Orchestra finished the celebration with a refrain of “I’m So New Orleans,” an equally energetic finale. At the end, Delfeayo gave fist bumps to each musician. Throughout the concert, there were so many fabulous solos from so many musicians, it was hard to pick a few as standouts. They were all superb, across the board. It was not only a wonderful birthday celebration for a member of one of the most renowned families in jazz, but it was also a fine kick-off for a great cause, KNOMA!

To donate and to learn more about KNOMA, go to: www.knoma.org.