Pianist and composer Craig Taborn says that his steadily-evolving music takes shape through an ongoing “conversation between composed sections and improvisation.” Returning to his Minneapolis hometown on April 13, Tabor and his trio continued their long-running, musical dialogue in two sets at the Dakota jazz club.
After more than 20 years based in the creative hub of NYC, Taborn has worked with a lot of musicians in many different configurations. At the Dakota he led a trio that included upright bassist Chris Lightcap and drummer Dan Weiss, both players he has worked with for more than 20 years. Taborn considers Lightcap and Weiss “top of the game” musicians; “at this point there is a real musical familiarity,” says Taborn, who takes an egalitarian approach to the piano trio, seeing the other two musicians as equal partners in creation, rather than mere support players.

Taborn, who started classical piano study in grade school, obviously has plenty of technique to execute his expansive musical ideas. But he seems adept at using that well-rounded skill to serve the music, rather than making flashy technique the center of attention. With his well-integrated playing style, he’s one of those innovators who seems to focus on sounds and moods rather than clever keyboard licks.Lightcap and Weiss are both on Taborn’s short list of trio members, due to their familiarity with Taborn’s musical tendencies and their ability to both anticipate and react to what he playing at any given moment. 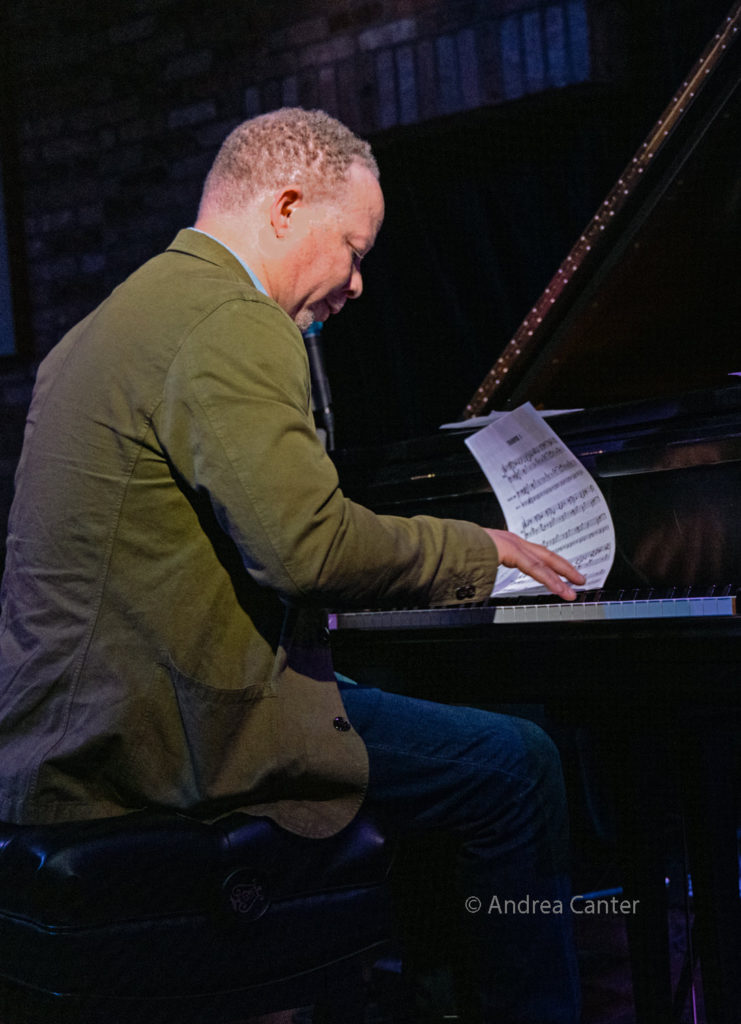 Lightcap’s resume includes work with James Carney, Regina Carter, Craig Taborn, Matt Wilson, Rob Brown, Joe Morris, and many more, He’s played in a number of genre-blending combos that reflect the continuing evolution of jazz, and its constant absorption of various musical strains. He’s worked with Taborn and Lightcap in the adventurous NYC combos BigMouth and SuperBigMouth, among other projects.
Weiss has been named as one of the top five drummers in current jazz by The New York Times, and his large ensemble recording “Fourteen” made the Times’ top ten list of the best records of 2014. Like Taborn, he has a wide musical palette developed in studying jazz, classical Indian music, contemporary classical, and West African rhythms, with a little heavy metal influence thrown in. According to his bio, he’s studied tabla under Samir Chatterjee for more than 25 years, performed Indian classical music with the greats Ashish Khan and Ramesh Misra and also recorded a solo tabla CD about 15 years ago. He’s also made two solo CDs performing classical Indian repertoire on the drum kit.
Wednesday’s late set consisted of a handful of tunes composed by Taborn, one of the most prolific composers of his generation. Taborn, who always has works in progress, has a 30-year backlog of material to draw on when he’s performing. So it wasn’t surprising to see both Lightcap and Weiss, who both work in a number of different improvised music combos, consulting sheet music as they played. “Everything is written to invite an improvised response, and both of these guys (Lightcap and Weiss) are really good at doing that,” Taborn notes.
The trio’s simpatico level of musical familiarity and comfort was evident as they played a combination of older and newer Taborn pieces, and carried on a sonic dialogue.
Taborn used an informal set list at the Dakota; something he doesn’t always do, as on a longer tour where the band has had more time to get familiar with the material.
Taborn’s unidentified opening piece started with a series of descending, then ascending arpeggios, with a complicated melody taking shape, as the other two musicians joined in, mirroring his sounds-sculpting. The creative Weiss provided rhythmic punctuation with some rim taps on his tom-tom.

Taborn took full advantage of the grand piano’s resonance and sustain, ending one passage with a thundering bass note, followed by some spare upper-register chords underpinned with a faintly-heard snare drum roll.  Lightcap plucked out an upright bass line that seemed to play tag with the meandering melody.
Taborn’s keyboard work ranged from percussive to gentle, imbuing each piece with plenty of dynamics and surprise, without being heavy-handed. At one point, Weiss contributed a well-conceived and executed drum solo that was like a composition in itself.

Another piece began with a restrained, two-beat rhythm and a nine-note bass ostinato with some upper register clusters on the piano that sounded like raindrops starting to fall. All three musicians showed their ability to create a range of shifting moods with their lyric-less abstractions.
For the encore that closed the second set, Taborn and the trio played a piece by one of his many keyboard influences, the late, great Sun Ra’s “Love in Outer Space.” One of Ra’s most melodic compositions, it was deftly handled by the trio.