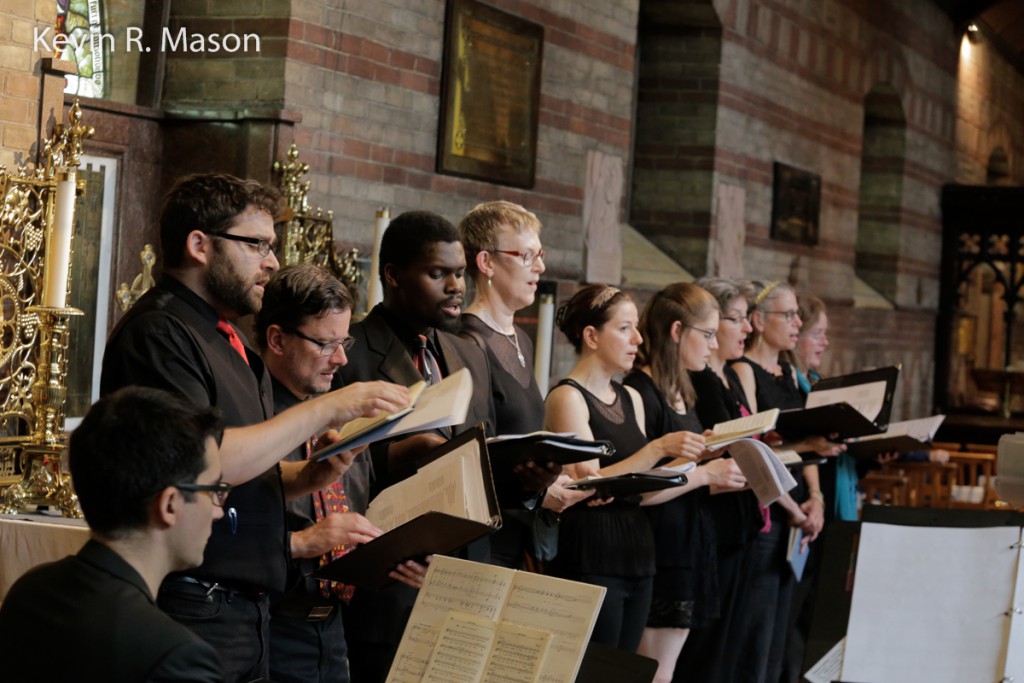 The Festival International de Jazz de Montréal attracts so many artists and so much music that numerous musical events go well beyond the Festival. There are jazz clubs, street musicians, late-night jam sessions, and the Festival’s own TD Jazz All-Year Round concert series. Legendary Montréal hostess Madeleine Murphy gives a monthly jazz party, Les vendredis Jazz, where she deftly combines great music, fabulous food, and wonderful ambience. Montréal has a cornucopia of jazz!

Jazz Mass at The Church of St. John the Evangelist 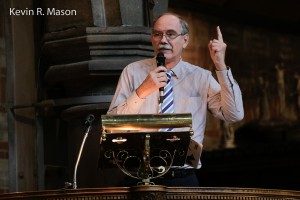 On Sunday, July 3, 2016, the Church of St. John the Evangelist, affectionately known as “The Red Roof Church,” hosted an excellent Jazz Mass. The first section was sung by the priest, deacon, and choir, with responses from the congregation. Then, Professor Norman Cornett, distinguished Canadian educator and historian, delivered a homily on jazz and spirituality. Cornett described a Jazz Mass as a service that “fuses tradition and innovation to explore the sacred by appealing to sight and sound.” He discussed the history of jazz, how it was initially considered base and degenerate, but was actually the music of disenfranchisement and the quest for freedom. Cornett quoted from the classic Burt Bacharach/Hal David song, “Alfie,” giving the congregation a renewed appreciation for the spiritual nature of the lyrics, especially “something even non-believers can believe in.” Juno Award-winning saxophonist Joel Miller played a gorgeous, moving rendition of “Amazing Grace.” 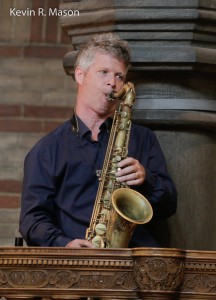 Director of Music and organist Federico Andreoni created new instrumental pieces and hymn adaptations just for the Jazz Mass. Andreoni said, “While remaining faithful to St. John’s traditional liturgical setting, the music for the Jazz Mass explored a wide variety of improvisatory styles and instrumentations. We performed Bob Chilcott’s Little Jazz Mass for choir, piano, bass, and drums, as the accompaniment to the Kyrie, Sanctus-Benedictus, and Agnus Dei, and newly composed and improvised arrangements.”

Joel Miller performed an exquisite coda to the Recessional Hymn, adding a perfect finale to the lovely service. The Jazz Mass was a balm for the spirit, and gave attendees some precious time for calm reflection during the very busy Festival.

For several years, Professor Norman Cornett has been hosting what he calls “dialogic sessions,” where people first review unidentified recordings, and at a later session, the audience meets the recording artist, who responds to comments and questions.  Cornett held two dialogic sessions at Church of St. John the Evangelist, with Tord Gustavsen and Wadada Leo Smith, both of whom had Festival concerts. 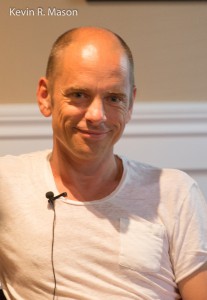 Tord Gustavsen. On July 4, Professor Cornett started the session by encouraging people to freely participate, stating, “There’s only one wrong question, and that’s the unasked question.” Cornett introduced Norwegian Grammy Award-winning pianist Tord Gustavsen, who expressed great appreciation that people had really listened to his music and put so much energy and creativity into responding. Tord, who has extensively studied psychology and philosophy, said, “Music can actually be a substantial helper on life’s journey.” Gustavsen noted that various songs have helped him in times of stress, and when he needed to open up parts of himself. On the subject of mortality, he said that commemorating death through music is an important part of the cycle of life.

Gustavsen finds inspiration for composing music in many sources, for instance, improvisation and hearing what other musicians play, even in sound checks. Poetry, historic cathedrals, contemporary churches, architecture, and geometric shapes in paintings are also great creative motivations for him. Tord has scored some short films, but is unsure about tackling a full-length movie, even though his atmospheric, evocative music would make an expressive soundtrack. A conversation about religion had the thoughtful artist observing that spirituality has negative connotations for some people, and has sometimes been misinterpreted in music. Gustavsen strongly disagreed with the idea that art should be separated from spiritual matters, and asserted, “If music is not spiritual, it’s dead.” Tord grew up in the church, and considers himself a Christian, but he doesn’t believe that religion should build boundaries between people. “That’s not what I’m about,” he said, adding that he’s troubled by all the dark and hostile voices in many of today’s religious traditions and belief systems.

It may come as a surprise to some people that gospel music is very popular in Norway, and Tord revealed that it is no longer controversial, the way it was when it was first introduced in Norwegian churches. Professor Cornett added, “Gospel music transcends time and space, even in Norway!” Throughout the session, Tord answered questions and responded to comments about his music, including songs from his latest album, What Was Said. He discussed minimalism and the fact that he sometimes has quiet periods in concerts. He waits until he feels that certain things are called for; he doesn’t feel the need to play just because he can, or play the way a set was rehearsed. Tord often finds this approach to performing challenging, but rewarding. When an audience member was critical of a singer who didn’t show a lot of vocal pyrotechnics on one song, Gustavsen defended the vocalist, saying, “Artistry is in small details.” Tord was very generous, open, and unafraid to show his emotions, and he was often visibly touched during the session. It was an insightful, deep, and enlightening experience to share thoughts with this fascinating and complex artist. For more information about Tord Gustavsen, go to: http://www.tordgustavsen.com/, or http://www.tordg.no/. 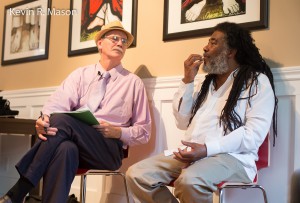 Wadada Leo Smith. Multi-instrumentalist/composer Wadada Leo Smith, who just won the Mohn Career Achievement Award (which honors brilliance and resilience), and received the Doris Duke Award earlier this year, participated in a dialogic session on July 7. Professor Cornett joked that it was a blind date of sorts, since the two men had only first met the previous evening, and said that Wadada agreed to the project “as an act of faith.” Cornett discussed the way music draws from both sides of the brain, stating, “Technology and art go hand in hand,” and observed that only recently have some separated the two. Professor Cornett then played a clip from “Marian Anderson,” a composition Wadada collaborated on with pianist Vijay Iyer. Smith responded to comments about the song, which was inspired by the life of the celebrated opera singer. Although Anderson suffered discrimination and was often denied justice, she also had great achievements and led a full, interesting life. Wadada discussed his choices about structure and solos when composing the song, and said that silence in a song is a choice. Smith also stated, “Listening is not based on hearing, but feeling.” He spoke of his close friendship with Vijay Iyer, with whom he has played for many years, and shared both joy and pain. He said when you have that kind of relationship, you don’t have to rehearse.

Wadada engaged in a thought-provoking conversation about the word “jazz,” which he said isn’t the what the originators named the music. Although Smith doesn’t reject the term “jazz,” he translates it for himself as “creative music.” He spoke eloquently about creativity, insisting that it cannot be taken away from people; even slaves found ways to create, despite oppressive efforts to deny or obliterate their artistic endeavors. “Creation lasts forever,” he said. Smith also pointed out the duality that existed during and after slavery, where people had to deal with the inhumane conditions of their circumstances, while managing to retain their humanity. He stressed the importance of historical research in music composition, where surprising information is often uncovered, and his inspirations include Malcolm X, Rosa Parks, and Medgar Evers. He also talked about the healing power of music, and witnessing how his composition “Divine Love” calmed a distraught family traveling to a funeral. An audience member spoke quite emotionally about her feelings and experiences with music, and Wadada responded with great empathy.

Smith touched on many subjects, including improvisation, naming and re-naming songs, and the culinary arts he learned from his mother.  He addressed the difficulties of the human condition, observing, “Human beings go through a lot,” but wisely noted, “You don’t have to always figure things out. It’s important to have the experience of knowing without knowing.”  Wadada described the time he lived in Paris, calling it a revelation. Although he recognized that racism existed, like most places, he was amazed at the depth and variety of music that was available. Eventually, the expatriate experience felt false to him, but his time in France certainly served an important purpose in his life.  At the end of Wadada’s deep and illuminating session, after listening to comments about his song, “Labyrinth,” he expressively said, “The experience is theirs, and therefore cannot be wrong.” He told the audience that he’d never forget them, or this experience.  For more information about Wadada Leo Smith, go to: www.wadadaleosmith.com/.

To learn more about dialogic sessions, go to: www.cdedec.com. For information about Church of St. John the Evangelist, go to: http://www.redroof.ca/.