Skip to content
Home>Recordings>Lynne Arriale Celebrates New Recording in the Dunsmore Room, May 15

Now, with the release of Give Us These Days (Challenge Records, 2018), this consummate storyteller returns to the piano trio format, and her CD release tour brings her back to the Twin Cities for a one-night performance in the Dunsmore Room at Crooners Lounge on May 15 (7 pm). This intimate space with its nine-foot Steinway is the perfect match of musician and music. And Lynne will be joined by two of the area’s finest, bassist Chris Bates and drummer Cory Healey.

With two acclaimed quartet releases, Nuance (2009) and Convergence (2011), as well as the solo album (Solo, 2012) combining Middle-Eastern, Celtic, Americana, and pop and rock influences on original compositions and reimagined covers, Lynne has continued her star trajectory with a singular musical vision. “I really can’t compare her to anyone,” said recent collaborator and multi-Grammy winner Randy Brecker. “Her music transcends the word ‘jazz’ – it is just pure music.” And “transcendent” is just one apt descriptor for the new release, Give Us These Days, marking Lynne’s triumphant return to the piano trio format and a new partnership with Dutch artists Jasper Somsen and Jasper Van Hulten. (See below)

Lynne was most recently in the Twin Cities in September 2013, conducting workshops and performing at the Dakota. 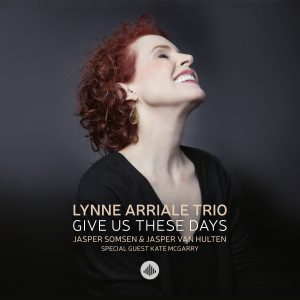 I am not an unbiased reviewer, having been a fan of Lynne Arriale since her first trio releases. A consistent characteristic of every release has been Lynne’s unfaltering emphasis on melody, be it her creative re-arrangements of standards or popular covers or her original compositions for solo, trio or larger ensembles. Her more recent work, however, has displayed an increasingly relaxed approach to improvisation with wider-ranging emotional power. Horns certainly contributed to this transition with the two quartet albums (Nuance and particularly Convergence). With Give Us These Days, the format is familiar (trio), the six originals and 3 covers (of Joni Mitchell, Lennon/McCartney, and Tom Waits) expectedly ripe with fresh melodies and arrangements, but there’s an overarching feel of freedom and joy that surpasses all that came before.  Majestic themes typically build intensity over the track while allowing Lynne’s bandmates plenty of room to shine. Foot-tapping rhythms twist throughout the aptly titled “Slightly Off-Center”; and “Over and Out” has a folksy-bluesy theme that bursts open with some quirky rhythms and harmonies riding on a wave of frenetic energy.

That is not to say that there are none of the quiet, reflective, delicate moments that have been part of Lynne’s signature since the beginning. Yet, even the relatively sedate “Another Sky”, “Finding Home,” and her almost solemn arrangement of “Let It Be” swell to majestic conclusions. The most delicate of all closes the album, a simple piano-voice duo arrangement of the Brennant/Waits ballad, “Take It With Me,” with special guest Kate McGarry. It’s a sweet sentimental song, here caressed with hope.

This album sits atop a discography that continually evolves, from an artist who manages to combine the ethereal and ferocious.  And one who never lets us forget the melody.

Hear Lynne Arriale in the intimate listening room, the Dunsmore Room at Crooners Lounge, on May 15, 7:30 pm. Reservations advised.

Crooners Lounge is located at 6161 NE Highway 65 (Central Av NE) in Fridley, about 20 minutes north of downtown Minneapolis and just north of I-694. www.croonersloungemn.com.   More about Lynne Arriale at www.lynnearriale.com