Renowned saxophonist Charles Parker, Jr., aka “Bird” and “Yardbird,” packed a lot of life and music into his 34 years on this earth. He has had a lasting influence on the genre of jazz, as well as inspiring countless musicians. For the past 26 years, the festival in Parker’s honor has presented some of the finest artists in the world, both veterans and emerging talents.  This vibrant, free festival is a yearly reminder of the musical genius of Charlie Parker. 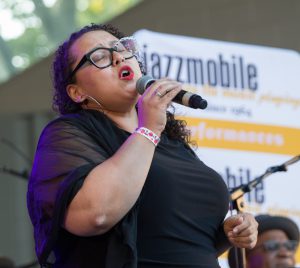 Vocalist Brianna Thomas started off the evening at Harlem’s Marcus Garvey Park with a sultry, bluesy version of “Since I Fell for You.” She was backed with strong support by Conun Pappas on keyboard and piano, bassist Ryan Berg, guitarist Marvin Sewell, drummer Alvin Atkinson, Jr., and Fernando Saci on percussion. It was a beautiful night, one of those perfect summer evenings that you dream about in the middle of winter. Brianna said, “For all of you who have ever been in love…the ability to love is a blessing,” as an introduction to “My Foolish Heart.” She added, “We like to take the old standards and put a little twist on them, a little “sumpin-sumpin.” Fats Waller and Billie Holiday were among the many who did renditions of “It’s a Sin to Tell a Lie,” and Brianna and her band did a softly romantic interpretation of the song. In a shift of tone, Brianna said of “Don’t Let the Sun Catch You Crying,” “This song is for all of you who are glad to see someone go! Here’s to the peace that absence can sometimes bring.” Next came an original song that Brianna wrote a few months ago, “I Belong to You,” and she followed with an impassioned performance of Nina Simone’s “Feeling Good.” She did another Nina Simone song, “Mississippi Goddam,” which Brianna described as a civil-rights era anthem, and she said that we’re still in a time of civil-rights struggle. The song was a vibrant and rousing finale to the set.

Charles Tolliver: A Tribute to the 50th Anniversary of Paper Man 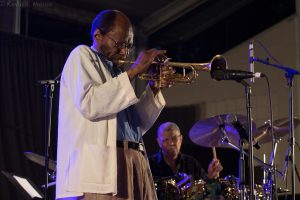 Trumpeter Charles Tolliver celebrated the 50th anniversary of his studio album, Paper Man.  Tolliver was joined by a star-studded group of jazz musicians: pianist Jason Moran, drummer Jack DeJohnette, bassist Buster Williams, and saxophonist Gary Bartz. Tolliver introduced the band members with obvious pride and affection in his voice. The original 1968 masterpiece was recorded at Town Sound Studios on July 2 in Englewood, New Jersey, and in addition to Bartz and Tolliver, that quintet included pianist Herbie Hancock, drummer Joe Chambers, and bassist Ron Carter. The hard and post-bop album of Tolliver’s compositions was first released in 1968 in South Africa, as Charles Tolliver and His All Stars, on the UK Black Lion Records label. Later, it was released as Paper Man in the U.S. by a subsidiary of Black Lion Records, the Freedom label, which was bought by Arista Records in 1975. It seems like providence that pianist Jason Moran, born in 1975, would be a part of this special project. The show started with extended versions of “Right Now” and “Earl’s World” (which Charles wrote for    his brother). There wasn’t a lot of talking during this set, but the playing was outstanding, with some truly exceptional solos. This is a group that could command a stage anywhere in the world! They continued with the melodic “Lil’s Paradise,” then transitioned into the driving “Household of Saud.” Gary Bartz said, “We’re also celebrating Charlie Parker, who was our hero.” The show closed with a delightfully energetic Charlie Parker song from his Charlie Parker with Strings LP, “Repetition,” which is on the Paper Man reissue.

WBGO Radio’s Sheila Anderson was the host of the day, which was filled with impressive music all afternoon, once again at Marcus Garvey Park. 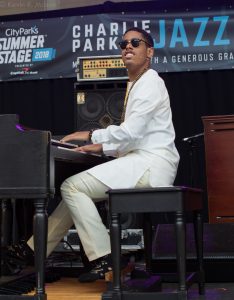 Matthew Whitaker, a 17-year-old piano/Hammond B3 player, performed with a virtuosity that belied his youth. Blind since birth, his prodigious talent has drawn inevitable comparisons to Stevie Wonder, whom he has opened for. With Ted Morcaldi on guitar/bass and Sipho Kunene on drums, Matthew performed “Come Together” and his own composition, “Emotions,” an upbeat, joyful song. He also played a mash-up of Earth Wind, & Fire songs “In the Stone” and “September.” Whitaker thanked the audience for coming out and supporting him. The show ended with Stevie Wonder’s “Always” that segued into “I Wish.” This young artist plays with an abundance of energy and skill, and if you haven’t heard of him yet, don’t worry, you will! 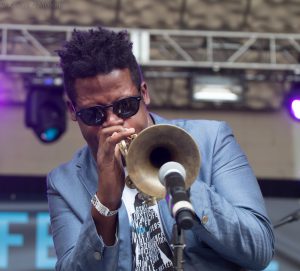 Trumpeter and vocalist Keyon Harrold’s show began with taped of words of encouragement from Keyon’s mother. Unfortunately, the audio recording of his mother was unclear, along with the recordings of some others during Keyon’s set. Still, the music was pretty fabulous, and eventually the sound for the tape was fixed. Keyon discussed working on the Miles Davis biopic, Miles Ahead, and how he and actor Don Cheadle came up with the word “mugician,” after Cheadle described what Keyon had achieved in the film as “being like a magician.” The Mugician is also the name of Harrold’s 2017 CD. He also talked about being from Ferguson, Missouri, and he wrote a song for the late Michael Brown, “MB Lament,” which was a beautifully mournful dirge. Harrold’s band had Nir Felder on guitar, Shedrick Mitchell on piano/organ, Carlos Henderson on bass, Charles Haynes on drums, Marcus Strickland on tenor saxophone/bass clarinet, vocalist Andrea Pizziconi, and rapper/MC Pharoahe Monch. Andrea Pizziconi lent her considerable talents to the protest song, “Circus Show.” Pharoahe Monch also sat in with a powerful rap. Keyon dedicated one song “to all the beautiful queens out there. It wouldn’t be a world without you all.” In addition to his mad trumpet skills, Keyon is also a talented, accomplished singer. He and his gifted cohorts created a set that was a fine addition to the Charlie Parker Jazz Festival. 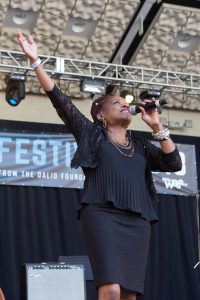 Dressed in a chic black ensemble, Catherine Russell sang with the ease and confidence she’s gained in her notable career. Accompanied by guitarist Matt Munisteri, pianist Mark Shane, bassist Tal Ronen, and drummer Mark McLean, Catherine packed a lot of songs into her show. The set list included “Them There Eyes,” “Is You Is, or Is You Ain’t My Baby,” “Alone Together,” “You Turned the Tables on Me,” and “You Can’t Pull the Wool Over My Eyes.” “You’ve Got the Right Key, But the Wrong Keyhole” was a sexy, saucy song that Catherine put over with a lot of feeling. The set continued with “How Deep is the Ocean (How High is the Sky)” and finished with “When Did You Leave Heaven.” Catherine and her crew really left the crowd wanting more. 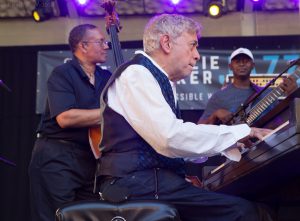 Pianist/melodica player Monty Alexander’s music joyfully mixes the influences of his birthplace, Jamaica, with jazz. Half of Monty’s band is from Jamaica, and they really did their homeland proud. Drummer James Johnson, percussionist Karl Wright, guitarist Andy Bassford, electric keyboardist Earl Appleton, trombonist Andrae Murchison, acoustic bassist Hassan JJ Shakur, tenor saxophonist Wayne Escoffery, and electric bassist Joshua Thomas joined Monty for a set that included “I Got Rhythm.” They segued from song to song, without missing a beat.  It was another perfect weather day and listening to Alexander and his band play island-infused music on such a summer day was pure bliss! Monty spoke highly about Bob Marley and said that he brought the world a message of hope, adding, “We need a lot of hope at this time.” The group also played Burning Spear’s song, “Marcus Garvey.” For the final song, Alexander pulled out the melodica and he played like a mischievous snake charmer, who had the audience at his feet, and on their feet. In fact, the music throughout the day was so winning, that several people danced during every set. Oh, it was a real party!

On Sunday, the Festival moved to Tompkins Square Park, located in the Alphabet City section of the East Village in lower Manhattan. The location is notable for the fact that Charlie Parker lived in Alphabet City for a time. 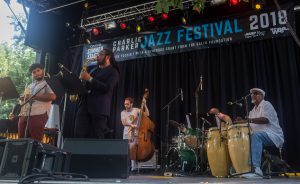 The day started with Unheard, a new work created in tribute to Charlie Parker. It was commissioned in association with The Joyce and George Wein Foundation, and under the artistic supervision of The Jazz Gallery. With Dean Torrey on bass, Roman Diaz on percussion and vocals, Immanuel Wilkins on alto saxophone, Adam O’Farrill on trumpet, Joel Ross on vibraphone, and Craig Weinrib on drums, the set was filled with atmospheric, thought-provoking music. The musicians took inspiration from Charlie Parker’s musical language and legacy, and it was a fine start to the day’s events. 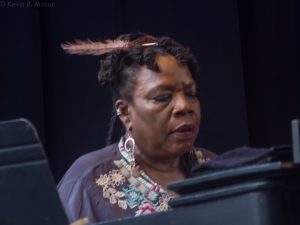 Organist/keyboardist/vocalist Amina Claudine Myers performed a show jam-packed with soul and passion. Amina was backed by bassist Jerome Harris and drummer Reggie Nicholson, and she played and sung with so much emotion, that the crowd was swept away on her wave of excitement. The set began with Myers’ composition “Blues in F” and continued with “Cantaloupe.” One song intimately told the story of a love affair gone wrong. Amina did a mash-up of “Chopin’s Nocturne in C Minor,” John Lee Hooker’s “Hard Time Blues,” and “Have Mercy Upon Us” that was exceptionally soulful and moving. Amina and her group really got to the heart of things in their stirring concert. 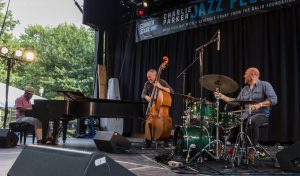 The Bad Plus, drummer David King, bassist Reid Anderson, and pianist Orrin Evans played a lovely, laid-back set that included “Big Eater,” “Wolf Out,” “Hurricane Birds,” “Safe Passage,” and “Seams.” Reid Anderson said, “Thank you for coming out and sharing the day with us.” These talented artists lent a wonderfully relaxed vibe to the Festival, and had the audience chilled out to the tranquil atmosphere they created. 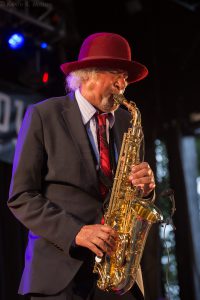 Saxophonist Gary Bartz said that they were going to go through many periods and pay tribute to many artists. Bartz shared the stage with drummer Lenny White, bassist James King, and guitarist Paul Bollenback, and they started with “Nomo, The Magic Song.” During the set, Bartz displayed a fine singing voice, along with his phenomenal alto saxophone skills. The show continued with ‘Can’t Help It” and “Rivers.” They also played a blues number in honor of Charlie Parker, who Bartz described as a great bluesman.  There was an extraordinarily beautiful version of “Fantasy” and a swinging “Just Friends.”  Gary said that “A Song of Loving/Kindness” was “a song I wrote for everyone and everything that ever was!” It was a brilliant ending to the set and the Festival. 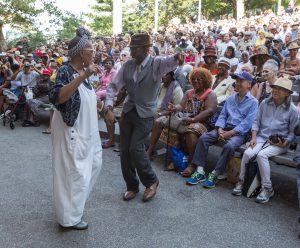 In addition to the events at Marcus Garvey Park and Tompkins Square Park, there were film screenings, concerts, seminars, workshops, and other activities at The National Jazz Museum in Harlem, The School of Jazz and Contemporary Music at The New School, The Maysles Documentary Center, the 6BC Botanical Garden, and the Harlem Rose Garden.

The Charlie Parker Jazz Festival was made possible by a generous grant from the Dalio Foundation. Part of the CityParks Foundation’s SummerStage, other sponsors included iHeartRadio, Subaru, AARP, and Capital One. SummerStage is New York City’s largest performing arts festival, taking place in Central Park and in neighborhoods around the city, from May to October, presenting approximately 100 performances, most of which are free of charge! For more information about The Charlie Parker Jazz Festival, go to: www.cityparksfoundation.org/charlieparker/