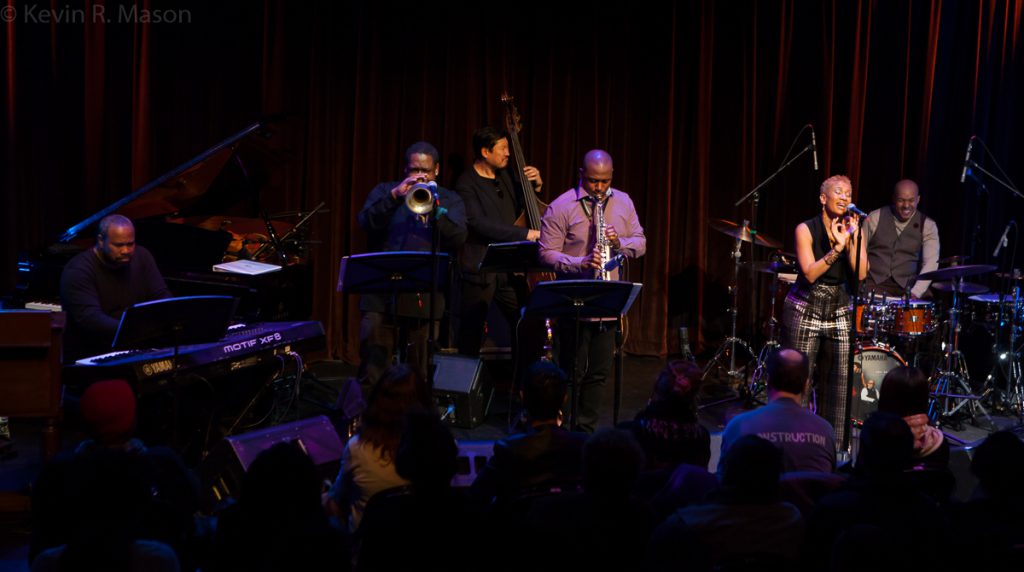 Writer’s Note: With all that is going on with the growing concerns over the virus pandemic, it is nice to look back at one of the many excellent free concerts in the New York area. I hope it is a nice distraction for those sheltering at home.

On December 5, 2019, a concert by the Baylor Project was presented by Carnegie Hall Citywide, in partnership with Harlem Stage, at Harlem Stage Gatehouse Theater.

On the Harlem Stage website, it says the following:

“Harlem Stage is the performing arts center that bridges Harlem’s cultural legacy to contemporary artists of color and dares to provide the artistic freedom that gives birth to new ideas.

For over 35 years our singular mission has been to perpetuate and celebrate the unique and diverse artistic legacy of Harlem and the indelible impression it has made on American culture. We provide opportunity, commissioning and support for artists of color, make performances easily accessible to all audiences and introduce children to the rich diversity, excitement and inspiration of the performing arts.

We fulfill our mission through commissioning, incubating and presenting innovative and vital work that responds to the historical and contemporary conditions that shape our lives and the communities we serve.

The New York Times has saluted Harlem Stage as “an invaluable incubator of talent” and we have been hailed as an organization still unafraid to take risks. Our investment in this visionary talent is often awarded in the early stages of many artists’ careers and we proudly celebrate their increasing success. Five members of our artist family have joined the ranks of MacArthur “Genius” Fellowship awardees: Kyle Abraham (2013), Vijay Iyer (2013), Jason Moran (2010), Bill T. Jones (1994) and Cecil Taylor (1991).

Harlem Stage is a winner of the Association of Performing Arts Presenters William Dawson Award for Programming Excellence and Sustained Achievement in Programming.”

The legendary Carnegie Hall has been presenting world-class performances since 1891. They also offer tours, and well as free admission to the Rose Museum, which has more than 400 archival treasures on display. Carnegie Hall also supports numerous educational activities throughout the city through its Weill Music Institute.

“Since it opened in 1891, Carnegie Hall has set the international standard for musical excellence as the aspirational destination for the world’s finest artists. From Tchaikovsky, Dvořák, Mahler, and Bartók to George Gershwin, Billie Holiday, Benny Goodman, Judy Garland, and The Beatles, an honor roll of music-making artists representing the finest of every genre has filled Carnegie Hall throughout the years.

“Carnegie Hall is honored to partner with local community organizations to present free concerts that are sensational celebrations of sounds from across the country and around the globe. At a Carnegie Hall Citywide concert, you can revisit your favorite music or try something new, stay in your home borough or journey farther afield. Whatever you choose, you’ll experience everything that makes New York City so vibrant.” 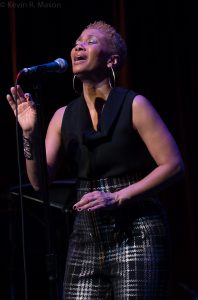 The Baylor Project is headed by husband-and-wife team Jean and Marcus Baylor, both children of preachers. Their deep roots in the gospel music of the church were later influenced by soul, blues, and jazz.

Jean, a vocalist/composer/arranger who hails from New Jersey, was introduced to jazz as a Vocal Performance major at Temple University, where she was highly influenced by artists like Carmen McRae, Jimmy Scott, and Shirley Horn. She was also part of the platinum recording duo, Zhane. Jean has worked with The Yellowjackets, Marcus Miller, Buster Williams, and Kenny Garrett. 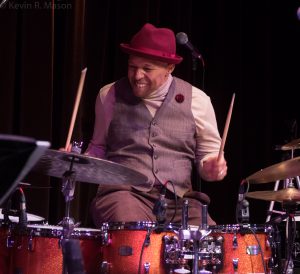 Marcus, a drummer, composer, arranger, bandleader, and producer, was already playing gigs while he was still a student at The New School for Jazz and Contemporary Music, performing and recording with John Scofield, Cassandra Wilson, and Kenny Garrett.  He was also part of the quartet The Yellowjackets. Together, the couple recorded their debut CD, The Journey in 2017, and it was nominated for two Grammy Awards for “Best Jazz Vocal Album” and “Best Traditional R & B Performance.” 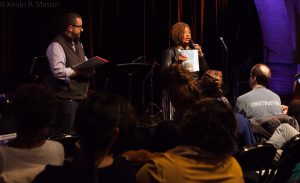 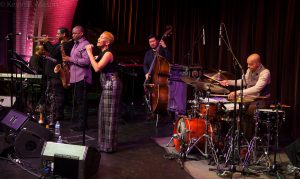 Marcus Baylor greeted the crowd, and said the evening was going to be “a whole church thing,” and exhorted the crowd to call out “Let the church say amen!” The band started the set with a funky, jazzy, rousing number, “Block Party” that really got the audience going right away. It featured some stand-out solos from saxophonist Keith Loftis and trumpeter Freddie Hendrix. Then, vocalist Jean Baylor joined the group to perform “Our Love Is Here to Stay” using her extraordinarily smooth and alluring voice that went from soft as a whisper to very powerful. She then thanked the audience for coming out on such a cold night, and joked, “I wouldn’t have done it!” Pianist Shedrick Mitchell started the next piece with an achingly beautiful solo as an introduction into to a gospel/jazz rendition of “Great Is Thy  Faithfulness.”  Jean put her whole body into the music, dancing during the times when she wasn’t singing, grooving to the other musician’s riffs. 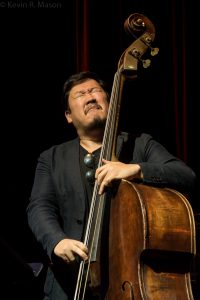 Marcus Baylor began the next musical treasure with an intense drum solo that was so good, an audience member yelled out, “Play those things!” Then they slowed things down with the romantic ballad, “Tenderly,” where bassist Yasushi Nakamura’s brilliant improvisation really sparkled on this gem. Jean then sang a spine-tingling spiritual, “Praise Song,” that showed off her multi-octave range. As Marcus promised, it was most definitely a spirit-filled evening with a wonderful blend of gospel, soul, and jazz. 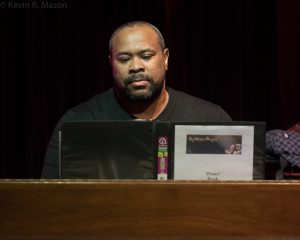 Next was a haunting version of “Afro Blue” followed by a very moving and inspiring “Laugh and Move On.”    The final song of the evening was one of their new compositions, “Happy to be With You,” a really swinging number that finished a show that was a riveting experience from beginning to end.

The chemistry between Jean and Marcus Baylor is palpable. They go from joking to flirting, with a sexy vibe that lets you know their romance is the real thing! They seem utterly delighted with one another, and it is a delight to watch them. The couple also has great chemistry with the other musicians, and they really involve the audience in their performance. It was a truly interactive show full of emotion and excellent music. 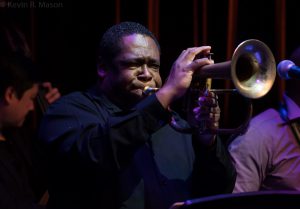 The Baylor Project has a new, soon to be released, CD called Generations. On their website, the CD is described as follows: 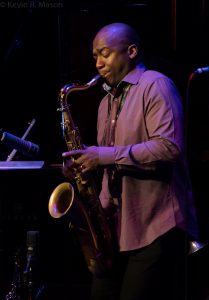 “”Generations” is much more than a collection of songs.  It is a cultural anthology rooted in everyday life experiences of love, family, community, faith, the African American experience and our individual and collective process of self-growth. It’s about honoring those who were here before us and how we will impact those who come after us.  “Generations” is the blues, roots, jazz, soul and gospel – it’s the sound of who we are.”

The Baylors have a crowdfunding project, the Indiegogo CD Campaign, to help to fund their new recording. For more information on The Baylor Project, their music and upcoming events, go to www.thebaylorproject.com.

For further information about Harlem Stage, go to www.harlemstage.org.

For more information about Carnegie Hall Citywide, go to https://www.carnegiehall.org/Events/Citywide.

At this writing, Harlem Stage and Carnegie Hall Citywide are scheduled to resume collaborations in May, depending upon the state of the pandemic crisis.  Hopefully, it will have abated by then. In the meantime, everyone reading this, please stay safe!

«Next Post Will the Arts Face a Corona Virus Challenge?
Twin Cities Spring 2020 Jazz Calendar: May the Music Never End, Even If It’s Virtual! Previous Post»