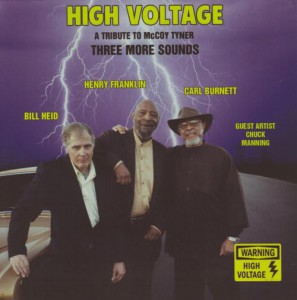 When the “Skipper” Henry Franklin (bass) and long-time friend, Carl Burnett (drums) get together, they make more magic, carried forward from their  days with Gene Harris’ Three Sounds.  This CD is a tribute to iconic pianist McCoy Tyner and also to the Three Sounds.   Franklin met pianist Bill Heid during one of his recent working trips to China.  They worked together for many months and recently Franklin, Heid and Burnett decided to produce this CD together.  They added an important member, tenor and soprano saxophonist, Chuck Manning.  Both Heid and Manning have many amazing musical credits in their careers.

There are eight selections on this album.  Five are written by Heid and and two are from McCoy Tyner.  Franklin adds his own “Under Tanzanian Skies.”  The collaboration of these musicians makes a major impact — hence the title High Voltage.

Pianist Heid plays and employs a funky groove in almost everything he performs. His own composition “Brother George” begins the CD, making a nice melodic statement and moving into a groovy four/four rhythmic shuffle, leaving room for a superb bass solo from Franklin.   Heid’s “Unit 8” highlights Chuck Manning playing the melody, with bass and drums tastefully supporting him and nice piano lines from Heid.  Heid’s “Off the Wall” is another stellar piece, Manning providing outstanding tenor playing while the trio really moves and rocks throughout this number.

Of the two compositions written by McCoy Tyner, “The Greeting” features Heid in an up-tempo piano solo and a whole-step progression, and Heid shines brilliantly.  In “Mellow Minor,” the rhythm is straight-ahead and grooves perfectly.

The closing “Bu Yao,” written by Heid, sparkles and has a call-and-answer from Heid’s brilliant piano with bass and drums responding.  Manning’s indelible playing brings this tune to the forefront.  This CD is one that produces impressive and ‘best’ numbers for each tune presented.

Reprinted and adapted from L.A. Jazz Scene, May 2016