Skip to content
Home>Recordings>Can You Believe It? JC Sanford and Quartet Celebrate CD Release at the Icehouse, January 23

“JC Sanford – the go-to music conductor for the forward-looking bands of John Hollenbeck, Joel Harrison, Alan Ferber and others, including the legendary Alice Coltrane – has been overlooked as a trombonist.” –Bill Day, liner note, Can You Believe It?

“JC Sanford is equally skilled as an arranger-composer and a trombonist.” –Jazz Inside Magazine

Minnesota native, trombonist/composer/conductor JC Sanford headed to New York after completing graduate studies at the New England Conservatory, figuring he would stay a year or two. Last July, sixteen years later, Sanford moved his family back to the Midwest, settling in Northfield just in time to celebrate the release of his New York quartet’s CD, Can You Believe It? He was back in New York at Shapeshifter Lab for his East Coast release earlier this month, and now is back home to celebrate with local pals Zacc Harris, Chris Bates and JT Bates at the Icehouse on Monday, January 23 (9:30 pm).

A protégé of legendary composer Bob Brookmeyer, trombonist JC Sanford studied at the University of Northern Iowa and completed doctoral studies at the New England Conservatory. Moving to New York in 2000, he became involved with the BMI Jazz Composers Workshop under the direction of Manny Albam and Jim McNeely and remained trombonist/contractor of the BMI/New York Jazz Orchestra until 2016. He has also appeared as a trombonist on recordings with such diverse bands as Andrew Green’s Narrow Margin, the Andrew Rathbun Large Ensemble, Nathan Parker Smith’s jazz/prog rock big band, and Joseph C. Phillips, Jr.’s new music/jazz hybrid orchestra, Numinous.

JC’s compositions have been performed by leading artists such as John Abercrombie and Dave Liebman and he has built a reputation as conductor of large ensembles, including the John Hollenbeck Large Ensemble, Alan Ferber Nonet, Alice Coltrane Orchestra and his own JC Sanford Orchestra. The JC Sanford Orchestra’s album, Views from the Inside, received worldwide acclaim as well as a coveted recording grant from the Aaron Copland Foundation. JC also wrote, performed and conducted a score to accompany the 143-minute 1927 silent classic  Ben Hur for the Syracuse International Film Festival, including the film theme “Forest Hills” which now appears on Can You Believe It. In addition to the orchestra and his quartet (JC4), he leads the improvisational trio Triocracy featuring saxophonists Chris Bacas and Andy Laster, whose new album, That’s All There Is, is due to be released later this year. He also curated a weekly large ensemble series (“Size Matters”) at the Tea Lounge in Brooklyn.

Of his return to the Midwest, JC notes that “We have a 2-year-old daughter and I went to school in Northfield, and my mom still lives there. New York kind of wore us out, and so we decided we’re going to go somewhere, and that seemed like a really good option. I had a few connections to the Twin Cities music scene. It just seemed like the natural thing to do.”  And he’s wasted no time jumping into the local jazz scene, adding his trombone to Chris Bates’ Red 5 at their most recent gig last weekend at the Black Dog.

Chris Bates and his brother, drummer JT, grew up with jazz, sons of trumpeter/bandleader Don Bates. He began bass lessons in 4th grade and progressed to jazz studies at the University of Wisconsin-Eau Claire before returning to the Twin Cities to study with Anthony Cox. A member of the 1990s ensemble, the Motion Poets, Chris was a 1999 McKnight Composer Fellow and in 2014 was awarded a commission from local new music ensemble Zeitgeist. He often lends his compositions to the many ensembles that he juggles throughout his busy performance schedule–including the Atlantis Quartet, Framework, Leisure Valley, Tall Tales, Red Planet, and his own Good Vibes Trio and Chris Bates’ Red Five.

J.T. Bates is one of the busiest drummers in the Twin Cities, on and off the bandstand. He was a member of Motion Poets and has worked with a variety of Latin, electronic, and experimental ensembles, including Bryan Nichols’ Quintet and Trio, Chris Bates’ Red Five, Fat Kid Wednesdays, the Zacc Harris Group, The Pines, and his own organ trio, Grain. In addition to curating the Jazz Implosion series at the Icehouse on Monday nights, JT often appears on the Icehouse stage and at other local venues with such musicians as brother Chris, Dave King, Brandon Wozniak, and more. 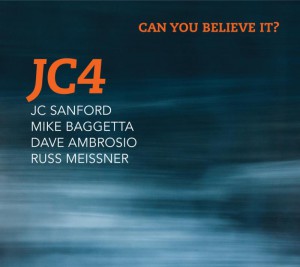 Can You Believe It? Featuring his New York-based JC4 (guitarist Mike Baggetta, bassist Dave Ambrosio and drummer Russ Meissner), Can You Believe It? (Red Piano Records) was released at the Shapeshifter Lab in Brooklyn earlier this month. Given his long list of big-ensemble credits, a quartet album seemed long overdue. “That’s part of the joke about the title — Can You Believe It – that I made a small group record,” says JC. Save for one John Scofield tune, the tracks are all Sanford originals. “My originals are sort of all over the place in terms of their character, and sort of free-ish stuff and some straight ahead-ish tunes with chord changes. I like to experiment with form a lot. It’s playing with the Bates brothers in particular that seems like a really natural fit.”

And with his Minnesota roots and broad range of New York experience, it seems like JC Sanford is a natural fit to the Twin Cities jazz scene in general, and to the Jazz Implosion series at the Icehouse in particular.

The Icehouse is located at 2528 Nicollet Avenue South in Minneapolis; www.icehousempls.com; cover for the JC Sanford Quartet $8 at the door, 21+. See more about JC Sanford at www.JCSanford.com