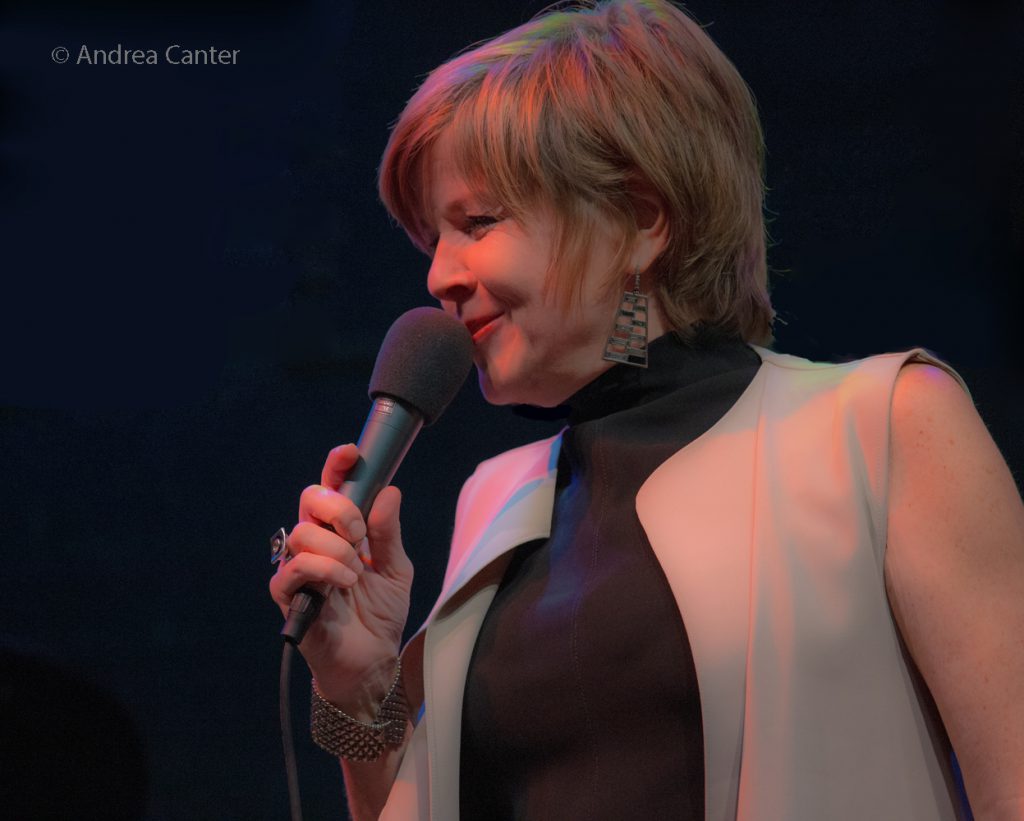 Five-time Grammy-nominated vocalist, composer and pianist Karrin Allyson brought her quartet to Catalina Jazz Club in Los Angeles for a three-day engagement March 24-26.  We attended Saturday, March 25th.  When you see an excited audience before any show, you know it will be the best. 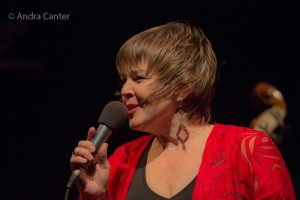 Allyson was born in Great Bend, KS and grew up mostly in Omaha, NE, spending her last year of high school in San Francisco before returning Omaha and earning a degree in classical piano at the University of Nebraska.  She had some key stints in Minneapolis and Kansas City before relocating to New York. She began recording on the Concord Jazz label in the early 90s, expanding her musical aspirations into scat and vocalese that has continued throughout her career.

Her group had amazing performers: an excellent young Miro Sprague on piano (and keyboards), Larry Koonse on guitar, and Jeff Johnson on a slimmed-down acoustic bass.  They began the evening with “A Felicidade,” one of Jobim’s marvelous sambas.  Allyson sang it in Portuguese – a very stirring rendition.  While the trio performs choruses, Allyson dances vivaciously to many songs they play.

Allyson has her own voice and it is very identifiable when listening to any song she sings.  One number that stood out for me was “Happy Talk” (from South Pacific). The lyrics are so positive and genuine which made it a standout tune of the evening.   The band’s performance of the wonderful jazz standard “Equinox” by John Coltrane made an excellent impression.  Not only was the band exceptional, but the lyrics written by Chris Caswell made this a highlight of this show, along with terrific choruses by Koonse, strong piano fills by Sprague, and a nice bass solo from Johnson.  For a number of years, Allyson and Caswell have been friends and collaborators on successful lyrics for several songs she performs. 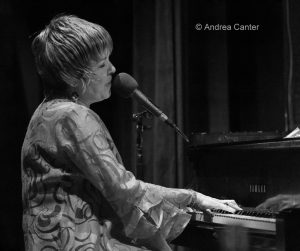 Other songs they performed in this one-set show included “Never Say Never” by Nat Adderley and “Footprints” (Miles Davis), with lyrics by Caswell and Allyson.  “Footprints” had some great piano lines and choruses from Sprague.  “Are You Happy Now?” (by Allyson) has her playing piano and singing this number.  An excellent tune that shined well was “O Pato” (by Jayme Silva and Neuza Teixeira).  Again, Allyson sang this in Portuguese.

During the entire show she and her exceptional trio were given many rounds of applause and a standing ovation at the show’s conclusion!  Allyson continues to tour both nationally and internationally.  See her splendid website:  http://www.karrin.com .