Music Beyond the 2017 Montreal Jazz Festival!

Every year, Le Festival International de Jazz de Montréal presents hundreds of concerts. However, Montréal’s vibrant music scene isn’t limited to the Festival itself. Before, during, and after the Festival, there are street musicians, late-night jam sessions, jazz clubs like Dièse Onze, Upstairs, and The House of Jazz, and many other exciting jazz-centered activities.

For years, celebrated Montréal hostess Madeleine Murphy has been presenting monthly parties, Les vendredis Jazz (Friday Night Jazz). Her soirees have been renowned for great music, fabulous food, and wonderful ambience that included live sketching by award-winning artist Robert Del Tredici and video by talented multi-media photographer/filmmaker Michel Verreault. On Friday, June 30, Madeleine hosted what she says will be the last of these amazing events. This was sad news for those lucky enough to attend any of the parties over the years, but she made the last of these celebrations a night to remember.  Brazilian jazz was the theme of the evening, which began with a lovely outdoor courtyard cocktail hour featuring a delectable buffet and delicious sangria. Enchanting music was played by percussionist Claude Thibault, Rodrigo Samoēs on mandolin, and guitarist Jason Davis. 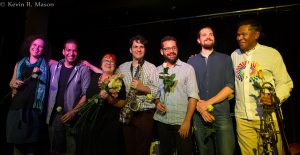 During the indoor portion of the party, at nearby Espace Cercle Carré, the resplendent and charismatic Madeleine, affectionately known as “Mado,” gave a heartfelt speech about the end of Les vendredis Jazz. After eight years of presenting almost 300 musicians, these beloved events developed quite a devoted following, and Mado thanked all the people who supported her through the years. Then, she introduced the Manoel Vieira Quintet, with pianist Manoel Vieira, drummer Carlos Henrique, saxophonist Jairzinho Teixiera, trombonist Alciomar Oliviera, and bassist Thierry Sterckeman. Manoel discussed Brazilian music, and the group played samba and bossa nova melodies so beautifully, it felt like being transported to Brazil. The set included Antônio Carlos Jobim’s “Wave,” with great work by all the musicians, and outstanding solos by Jairzinho Teixiera and Alciomar Oliviera. Special guest vocalist Karina Ninni, from São Paulo, sat in without any rehearsal. In fact, she’d only met the band members an hour before the show, and said, “It’s really a jam!” However, Karina fit in so well, you’d never have known she hadn’t been part of the group. With her rich and sultry voice, she was a wonderful surprise addition to the night’s exquisite music. Karina performed in both sets, and thrilled the international audience when she sang “The Girl From Ipanema” in both Portuguese and English. At the end of the evening, Mado gave a gorgeous rose to each of the musicians and guests, which emphasized what a thoughtful hostess she is. Her friend Rosa Bautista said, “It takes Mado to think of details like this.” Maybe Les vendredis Jazz will return someday (we can hope). But if this is indeed the end, it was a fabulous ride while it lasted, and these parties won’t be forgotten! 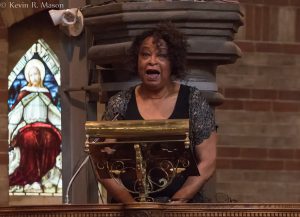 On Sunday, July 2, Professor Norman Cornett, respected Canadian educator, hosted a Jazz Mass at Church of St. John the Evangelist, aka the “Red Roof Church.” Award-winning blues singer Dawn Tyler Watson was the homilist, and she spoke movingly about her experiences after leaving the church, and the negative effect her behavior had on her family. “My gift is the thing that saved me, and helped me to believe in myself.” Along with singing, a renewed faith pulled Dawn back from the dark road she had traveled. Esteemed jazz vocalist Ranee Lee performed a magnificent a cappella song about the beauty of love. The choir sang throughout the service with such glorious harmony, that it was truly breathtaking. Adding greatly to the spirit and creativity of the Jazz Mass, the church was filled with a spectacular art exhibition by Canadian/Swiss/Haitian painter Martine Fourcand, titled The Spirit of Jazz in Living Colour. The beautiful paintings in this collection were a wonderful backdrop for the Jazz Mass, and up close you could see the extraordinary detail of Martine’s technique. For more information about Martine Fourcand’s artistic endeavors, go to www.martinefourcand.com. 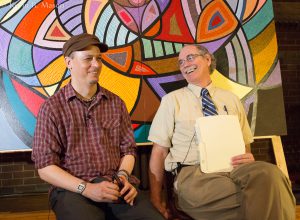 In addition to the Jazz Mass, Professor Cornett hosted three “dialogic” workshops at Church of St. John the Evangelist, where guest musicians listened to commentary on their music, and answered questions from the audience.

On July 1, Canada Day, multi-instrumentalist Kurt Rosenwinkel, whose honors include an NEA Composer’s Award, was the guest. Professor Cornett described this workshop as jazz’s version of a blind date, since he and Rosenwinkel hadn’t met before, and had only exchanged emails. He thanked previous dialogic participant, saxophonist David Binney, for helping to arrange Kurt Rosenwinkel’s appearance. Kurt said it was very moving to hear people’s reactions to songs from his CD, Caipi, and revealed that all the songs are manifestations of love. Kurt discussed the different ways he engages with whatever instrument he’s playing. On a more spiritual level, Rosenwinkel believes in the soul of an instrument, ready to be made manifest, and that it’s important to feel what the instrument has inside. Often, he creates music during moments of repose or transition, and songs can come from different moods and emotions. Sometimes, he just takes a leap of faith with a song. He loves encouraging his kids’ creativity, so he plays a game with them called “Magic Chord,” where he asks them to think of a feeling, then go to the piano and play that feeling in a chord. When asked if he ever faces a lack of inspiration, he responded that people aren’t inspired 100% of the time, so he doesn’t try to push it. He believes musical ability is a gift from God, and you can only be grateful for it. He added, “Everything in life is so interesting. I’m never bored.” Kurt has a very relaxed attitude if a song goes wrong at a gig. “Nobody’s going to get killed. If a song doesn’t go well, it’s not that big a deal.” He’s more in favor of mentoring than teaching by curriculum, because there are many aspects of music that can’t be codified, especially jazz, which is so improvisational. However, he acknowledged that schools spread the word about jazz worldwide, and give students a good foundation. In collaborations with other artists, he stressed the importance of honesty, respect, empathy, and good intentions. Rosenwinkel initially seemed shy and reserved, but it was soon evident that he’s also expressive and animated. He carefully considers his answers, giving listeners much deeper insight into his motivations than a typical question-and-answer session. For more information about Kurt’s upcoming events, go to www.kurtrosenwinkel.com. 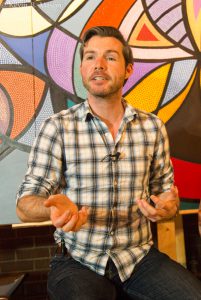 On July 4, British pianist/composer Gwilym Simcock was Professor Cornett’s guest. Simcock’s honors include BBC Jazz Awards, and the Evening Standard chose him as one of the “1000 Most Influential People in London.”  His wide-ranging influences include jazz giants Keith Jarrett, Chick Corea, Jaco Pastorius, and Pat Metheny, and classical composers Maurice Ravel, Henri Dutilleux, Béla Bartók, and Mark-Anthony Turnage. Simcock said it was a real privilege to be at the workshop. He spoke lovingly of his organist father and his mother, a former teacher who initially home-schooled him, and their incredible dedication and sacrifice in providing him opportunities to study music. At age 11, he received the highest grades in the country for his studies in French horn and piano. His parents are quite proud of his many impressive achievements, although sometimes surprised by his wide variety of gigs. Gwilym spoke very bravely and candidly about how anxiety has affected his life as a performer. He thinks anxiety also affects audiences, making it difficult to be fully engaged if they sense an artist’s nervousness. He finds the half-hour before a concert excruciating, because it’s like “dead space,” so he often dresses at the last minute. As Professor of Jazz Piano at London’s Royal Academy of Music, he discusses anxiety with students, because it’s rarely broached in academic settings. He is so easygoing, affable, and charming, that it’s hard to picture him suffering from anxiety, but he spoke about it so eloquently, you know it’s real. Since he plays everywhere from jazz clubs to concert halls to art galleries, sometimes he’ll get fabulous acoustics, but a terrible piano, and vice versa, so he often adjusts his set to the venue. Soccer is one of Simcock’s biggest passions, but an accident while playing required emergency surgery on his right hand. However, there was a silver lining. Not wanting to cancel any performances, he played with his left hand, which strengthened his left-hand ability and range. On composing, he said, “I’ve always tried to make music that would withstand repeated listening.” He discussed the importance of harmony, which he thinks is sorely lacking in some of today’s music. He’s impressed with the classic albums of the era of Charlie Parker and Miles Davis that were recorded before technical advances allowed cherry-picking the best parts. In addition to jazz and classical, Simcock loves progressive rock, Stevie Wonder, Michael Jackson, and Earth, Wind & Fire. To learn more about Gwilym Simcock, go to www.gwilymsimcock.com. 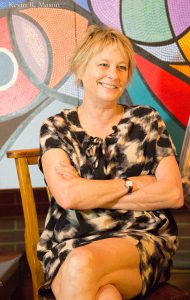 On July 5, Cornett’s dialogic workshop guest was acclaimed Canadian multi-instrumentalist and activist Jane Bunnett, whose honors include the Order of Canada and the Diamond Jubilee Medal. She is known for her creative integrity and courage in her tireless support of Cuban music and musicians, ever since a trip to Cuba in 1982. Cornett said, “She mirrors a social conscience, and it goes back a long way.” He recounted how Jane has championed and encouraged Cuban musicians for years, long before it became trendy, giving instruments, mentoring young artists, and much more. A lot of this work is done through Spirits of Havana, an organization Bunnett runs with her husband, Larry Cramer, and there’s a documentary of the same name about the group. She said, “I’ve had an incredibly supportive husband,” adding that he’s been with her every step of the way, including doing the painstaking work of arranging tours for Cuban artists. Jane discussed Oddara, her new CD with her group Maqueque (which loosely translated means the energy of a young girl’s spirit). Maqueque, which is made up of young Cuban women, was created from Jane’s desire to get female musicians in Cuba off the sidelines. Bunnett had taken note of the fact that even after many years of training, most Cuban women don’t go on to have professional careers. She said, “There’s still a stigma about girls’ groups.” Jane has even had some concert promoters say they hadn’t expected Maqueque to be so good. She recalled how Maqueque got together and all the problems they overcame, including visa and travel difficulties, finding rehearsal space, instrument issues, losing members, and Jane’s own doubts about the quality of their first CD, Jane Bunnett and Maqueque. Fortunately, the CD won a Juno Award, and now the group is very tight. Jane also discussed the Cuban embargo, noting, “The embargo has been a double-edged sword.” Before the embargo, Dizzy Gillespie and many other musicians were doing incredible music, but the embargo shut that all down. On the other hand, the changing status of the embargo has recently caused lots of chaos. However, whatever happens with the politics of Cuba, you know Jane will still be fearlessly promoting Cuban music, and Maqueque will be excellent ambassadors. For additional info about Jane Bunnett and Maqueque, go to www.janebunnett.com.

To learn more about Church of St. John the Evangelist, go to www.redroof.ca. For more about dialogic workshops, go to: www.cdedec.com.

«Next Post The Bad Plus and Bill Frisell at The Walker, September 29
Trio 280, JC Sanford Quartet at the Black Dog on September 30 Previous Post»