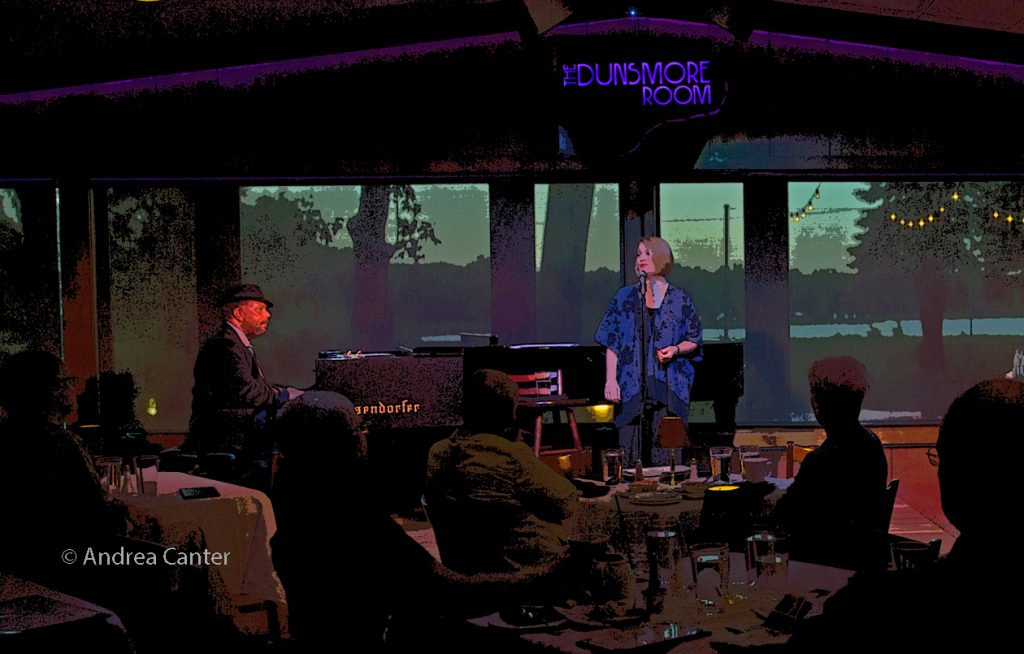 “Maud Hixson is one of the best, most sensitive and creative song stylists to come out of the pages of the Great American Songbook in the last decade.  She has taste and sophistication, she is full of surprises, and boy can she sing!” –Rex Reed 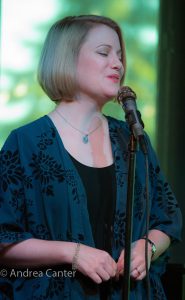 “Hixson’s slightly gauzy tone and breezy phrasing evoked cool-school singers of the 1950s such as June Christy, Chris Connor and Anita O’Day. Yet there was nothing historic nor nostalgic about Hixson’s manner, her inherent swing sensibility driving the music unstoppably forward. She benefited significantly from the pianism of Rick Carlson, whose buoyant accompaniment referenced the stride-style wizardry of Waller and James P. Johnson.” — Howard Reich, Chicago Tribune

Much acclaimed from Minnesota to New York for her interpretations of the great songwriters of the 20s-60s, Twin Cities vocalist Maud Hixson tackles the Irving Berlin songbook on Tuesday, November 14, in the Dunsmore Room at Crooners Lounge. She’s joined by husband and star pianist Rick Carlson.

Noted PBS, “Irving Berlin’s popular music served as a social barometer for much of the 20th century: it marched to war with soldiers, offered hope and inspiration to a nation in bleak times, and rejoiced in the good things embodied in the American way of life. It also provided anthems for American culture in such standards as ‘White Christmas,’ ‘Easter Parade,’ ‘God Bless America,’ and ‘There’s No Business Like Show Business.'”

Born Israel Baline in Siberia in 1888, Berlin and his family emigrated to the U.S. to escape Russian persecution of Jews. They settled in Manhattan’s Lower East Side where he sang on street corners to make some money, worked as a singing waiter, and began his career in songwriting. He adopted the name Irving Berlin when he sold his first song. Eventually he took a job as a lyricist for a music publishing firm, publishing his first hit in 1911– “Alexander’s Ragtime Band”– which earned him the title “King of Tin Pan Alley.” After staging shows on Broadway (e.g., Annie Get Your Gun, Berlin moved on to Hollywood, scoring films such as Top Hat and Holiday Inn, the latter including his biggest hit, “White Christmas.” During World War I and II, he wrote patriotic songs including “God Bless America,” and also wrote some of the most popular ballads of the era, including “What’ll I Do, “Remember”, and “Always.” Over his long life (he died in 1989 at 101), Berlin received long list of awards including an Oscar and a Gold Medal from President Eisenhower. 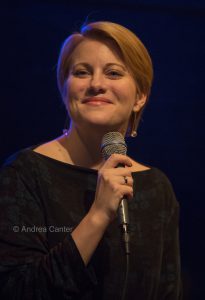 A St. Louis Park native, Maud Hixson was named Best New Voice at the 2003 KBEM Winter Jazz Festival.  A few years later, she participated in the famed Cabaret Conference at Yale University, opening the door to a project funded through grants from the Minnesota Arts Board—a solo cabaret show, Mickey and Maud: The Songs of Michael (Mickey) Leonard, presented in December 2008 at New York City’s oldest cabaret, the Duplex; the music was captured on her 2013 release, Don’t Let a Good Thing Get Away, named one of the year’s top local recordings by the Star Tribune’s Critics Tally.

Since her first years singing in Twin Cities clubs, often in duo with vocalist Arne Fogel, Maud has co-founded the continental jazz sextet French 75 with clarinetist Tony Balluff, appeared at the Guthrie Theater (with vocalist Erin Schwab) in the Noel Coward revue Coward’s Women, and appeared in multiple theater productions with Arne Fogel (including the popular Crosby-Clooney Story). In New York City, Maud has appeared in a Mickey Leonard tribute at Manhattan’s Metropolitan Room, performed with the late Sir Richard Rodney Bennett on the long-running Midtown at Midday concert series at St. Peter’s in Manhattan, participated in a gala revue at Rose Hall (Jazz at Lincoln Center) for the New York Cabaret Convention, and appeared again in Rose Hall in October 2016 in a tribute to singer Sylvia Syms, hosted by Rex Reed and presented by the Mabel Mercer Foundation. This past winter, Maud made her Park Square Theater Debut in The Soul of Gershwin. And in April, Maud and Rick performed at the Chicago Cabaret Convention, drawing praise from critic Howard Reich, who referred to their performance of “Soliloquy” as “the dramatic centerpiece of the night,” adding “They need to return to Chicago soon.” 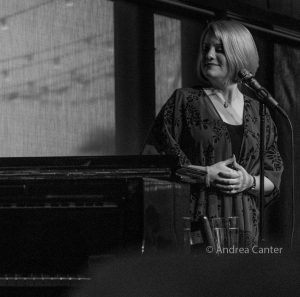 Maud has also performed her Skyscraper Wits, a tribute to the great songwriters, in New York and London.  A recipient of three Artist Initiative Grants from the Minnesota State Arts Board and a 2015 Next Step Grant from the McKnight Foundation, Maud has released a duo recording with Arne Fogel, Let’s Not Be Sensible (2005), a duo CD with husband Rick Carlson, Love’s Refrain (2007), her Mickey Leonard project, Don’t Let a Good Thing Get Away (2013), and a collection of songs referenced in the Betsy-Tacy series of books written by Maud Hart Lovelace, Listening for My Song (2016).

Throughout her career, Maud has explored great songs –familiar, forgotten or virtually unknown, largely from the 1920s-40s. Among other projects, Maud and Rick presented a monthly summer series in 2017 at St Albert the Great Church, tackling a different decade of song each month, from the 1920s-1950s. With her latest Artist Initiative Grant, Maud performed new big band arrangements written by Rick Carlson with the Wolverines Big Band, last weekend at the Schneider Theater in Bloomington. 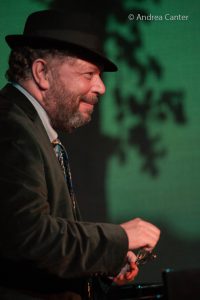 Since 1980, Rick Carlson has held the piano chair for the Wolverines Jazz Band and Trio. And throughout the past 30+ years, he also has headed his own quartet and has been a favorite accompanist for area vocalists. Rick first learned trumpet from his father, and initially resisted learning the piano when given lessons at age 12. Ultimately he taught himself to play by listening to the canons of Count Basie and Duke Ellington. In addition to his role with the Wolverines, Rick plays with the Twin Cities Seven; has opened for Rosemary Clooney; backed Kathryn Crosby, Wynton Marsalis, and Butch Miles; has recorded and/or played with Charmin Michelle, Sue Tucker, Arne Fogel, Judi Donaghy, Nichola Miller and wife Maud Hixson. His projects have included holding the keyboard duties for two Twin Cities Jazz Society “Jazz From J to Z” concerts—“My Shining Hour” (tribute to Harold Arlen) starring Christine Rosholt, and his “Keepers of the Basie Flame” revue featuring seven of the area’s top vocalists; he recently completed new big band arrangements for the Wolverines, featuring Maud on vocals. 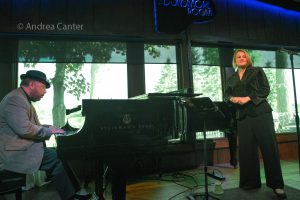 Rick has served as pianist/arranger/music director for a number of productions, including the Legends series at the Capri Theater, Coward’s Women at the Guthrie and Evan Christopher’s Clarinet Road at the Hopkins Center for the Arts. Rick continues to perform regularly at Hell’s Kitchen with the Wolverines Trio, in duo with Steve Pikal each year on the Jazz at St Barney’s series, and frequently during happy hour (and more) at Crooners Lounge. He’s appeared on numerous recordings with Twin Cities musicians, including several releases with the Wolverines, Nichola Miller’s Thou Swingeth, and Doug Haining’s Last Man Swinging. With Maud, he released the duo CD, Love’s Refrain, and Listening for My Song.

The Dunsmore Room in Crooners Lounge is located at 6161 Highway 65 NE, just north of I-694 and about 15 minutes north of downtown Minneapolis. Tickets are $15; www.croonerloungemn.com.