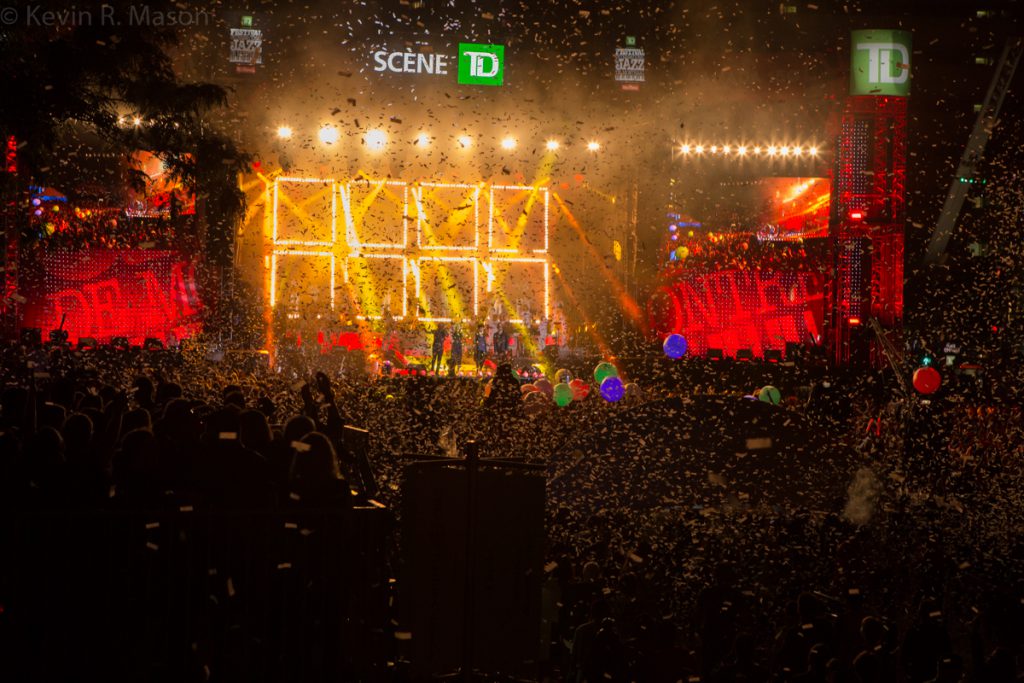 The 2019 Montreal Jazz Festival, officially called Festival International de Jazz de Montréal, will take place from June 27 to July 6. There will be 3000 musicians from 30 countries, performing over 500 concerts at seven outdoor stages and 13 indoor concert venues, all for the enjoyment of 2 million Festival-goers! 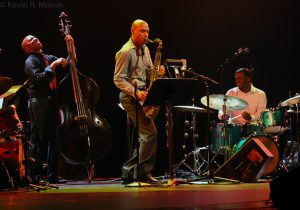 On Wednesday, April 3, the Festival held a press conference/preview party in New York City, at Sirius XM Radio, hosted by Festival Co-founder and Vice President André Ménard.  The event started with an excellent mini-concert by the Joshua Redman Quartet, with Joshua Redman on sax, bassist Reuben Rogers, pianist Aaron Goldberg, and drummer Gregory Hutchinson. They played songs from their latest CD, Come What May, starting with “Circle of Life” which had the greatest mix of rhythms, and it was as joy to listen to the energetic song. They followed up with “How We Do” and “I’ll Go Mine.”

Journalist Mark Ruffin acted as MC, and he interviewed Joshua Redman. Joshua discussed his current tour, and the fact that he has played with these musicians for over 20 years. “We know each other very, very well as musicians,” and he added that it makes such a difference when you perform with other artists you love. Redman also talked about the fact that this will be the last year that André Ménard will be Vice President of the Festival. He said, “I can’t even imagine the Festival without André Ménard…There is no greater festival in the world…You feel the celebratory feeling everywhere out in the streets.” Ménard took the microphone and reminisced about the Festival over the years, that included artists like Oscar Peterson. He also gave an overview of the upcoming Festival’s line-up. 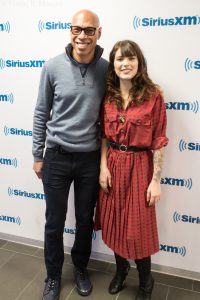 Then vibraphonist Sasha Berliner took the stage and performed a beautifully surreal song, impressively using four mallets at once. From San Francisco, Sasha started out on the drums, but took up the vibraphone about four years ago. She is now flourishing on the instrument, and she cites Gary Burton as a huge inspiration, and notes that Warren Wolf is a hero and mentor to her. Her first CD, Gold, was composed in 2015, and her latest CD, Azalea is due to be released this year.  In addition to her vibrant playing, Sasha also discussed how she got the gig at the Festival. Her outdoor show will be on June 5. The preview party was an excellent introduction to this year’s festivities. It is a landmark occasion, as it will be the 40th edition of the Festival, and it promises to be exceptional. 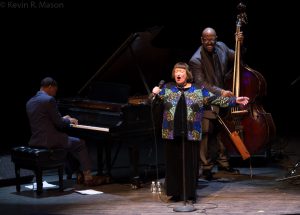 The Festival is ranked by Guinness World Records as the largest jazz festival in the world, and each year it takes over a large part of downtown Montréal for 10 days. This year, it is expanding even further, with concerts taking place in the borough of Verdun.

“Last spring, the Festival announced an ambitious development plan that will allow it to increase its presence across the territory and to meet citizens where they live. In relation with the new Cultural Policy of the City of Montréal and the new Tourisme Montréal Development Strategy, the Festival will promote the discovery of the cultural wealth of the various neighbourhoods of the city by anchoring itself in several of them. Thus, in addition to continuing to occupy its central site in the Quartier des Spectacles with large-scale gatherings, indoor shows and family activities, the global Festival will reach a local public thanks to the creation of new festival hubs.

Following a “request for interest”, the evaluation of particularly stimulating applications, as well as many discussions and meetings, the choice of Verdun was obvious for the Festival. Starting in 2019, the Festival International de Jazz de Montréal will also take place in the Verdun borough!

“I’m very proud that our project created so much interest. We received applications from 15 boroughs. Every proposal was very interesting and original. As such, we have inspiration for many years to come. But for the first iteration of the concept, we chose Verdun because of the dynamism of that borough and its population, the SDC Promenade Wellington and the merchants of the sector. We’ll be able to count on solid partnerships, and their financial participation in the project shows the potential of the concept. Wellington Street reminds us of the years of the Festival on St-Denis Street. We’re happy and proud that the Festival will continue its development in the service of our beautiful city.” Jacques-André Dupont, President and Chief Executive Officer of the Festival International de Jazz de Montréal 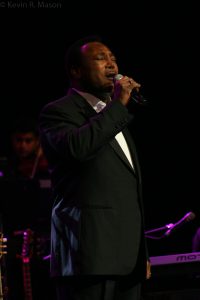 The new site will host original experiences created especially for the borough and the communities that live there, in collaboration with community organizations, merchants and citizens. It will be accessible for free and will offer the same artistic quality as the rest of the Festival, in addition to respecting sustainable development and eco-responsibility principles.

By further reaching communities and inviting Montrealers and tourists to visit a neighbourhood with which they are less familiar, the new site will foster citizen meetings and generate new benefits for the borough, in a spirit of inclusion and integration.” 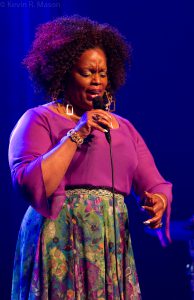 In addition to the outstanding indoor line-up, there are also hundreds of FREE outdoor shows that run from noon to midnight every day of the Festival. These concerts include performers from all over the world. Here are some of the major concert events on the TD Stage:

This year, the charismatic Canadian singer/songwriter Charlotte Cardin will kick off the grand events on Thursday, June 27. Her voice and musical creations will undoubtedly wonderfully launch the 2019 Festival International de Jazz de Montréal with this grand event presented by Rio Tinto!

On July 2, the great music of Australian artist Nick Murphy (aka Chet Faker) will thrill the public with sensual vibes and off-kilter beats.

Finally, the festival will close on July 6 with a highly anticipated concert by gifted Canadian performer Matt Holubowski. Expect powerful energy on the TD Stage that night! 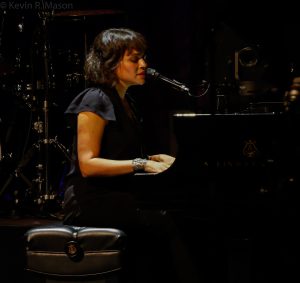 The Festival annually gives several prestigious awards.  The Montréal Jazz Festival Spirit Award is given to an artist who is known for quality and musical innovation, as well their undeniable influence on the international music scene. The B.B. King Award honors a musician who has left an indelible mark on the blues scene. The Antônio Carlos Jobim Award recognizes an artist who has had a great influence on the evolution of the cultural crossover of jazz. The Ella Fitzgerald Award is conferred in recognition of a singer with exceptional improvisational skills, a significant repertoire and renown on the international stage. The Miles Davis Award rewards a great international jazz musician for their body of work and influence on the idiom of jazz. The Oscar Peterson Award salutes a Canadian musician who has made outstanding contributions to jazz. The Bruce Lundvall Award is given to a non-musician who has made a significant mark on the world of jazz through media, concerts, or the recording industry. The TD Grand Jazz Award bestows recognition on a promising Canadian jazz group, and helps to launch the group’s career with several types of important exposure.

Music Beyond the Festival

There is so much music during the Festival, that it goes beyond the official events. There are jazz clubs, late-night jam sessions, and street musicians. One of the notable events that has been taking place for the last several years is the Jazz Mass at The Church of St. John the Evangelist, affectionately nicknamed the Red Roof Church. This Mass is a collaboration between the church and esteemed Canadian educator Professor Norman Cornett. It will be held on Sunday, June 30 at 10:30 am, at 137 Avenue President-Kennedy, located right outside of the main Festival grounds. The featured soloist at the Jazz Mass will be multi-award-winning saxophonist/composer/arranger Jean-Pierre Zanella, whose honors include the Festival’s Oscar Peterson Award.  Dr. Federico Andreoni, Music Director of the Red Roof Church, had this to say: “This year, I wanted to make improvisation the core feature of our Jazz Mass, and to find music that would speak to both our tradition and contemporary sensibilities in a liturgically meaningful way. I am excited to announce that the repertoire for this year will be a combination of ancient and new music, as the choir will join saxophonist Jean-Pierre Zanella to create a soundscape that combines ancient polyphony and newly improvised tunes.” The homily will be read by noted jazz vocalist Susie Arioli, a Toronto native who now lives in Montréal. Ms. Arioli has received much recognition during her career, and she is also a recipient of the Oscar Peterson Award.

Professor Norman Cornett is also the invited curator of an art exhibition at the church by award-winning visual artist, John Carl Heywood, titled: Jazzed: The Art of J.C. Heywood.

For more information about the Jazz Mass and Professor Cornett’s other activities, go to: www.cdedec.com

The official headquarters of the Festival, Maison Du Festival, is located at 305 Saint Catherine Street West, right in the heart of the Festival site. At night, the side of the building has a stunning lighted display of blown-up photographs of many of the legendary performers who have appeared at the Festival over the years. This building houses the concert venue L’Astral, the souvenir shop, and one of the greatest jazz resources in the world, Mèdiathèque Jazz / La Presse +, which offers over 50,000 audio archives, 30,000 photographs, and 1,000 videos and concerts that include artists who have appeared at the Festival since 1980. Entrance is on the 3rd floor, and FREE of charge! 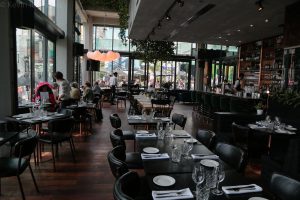 Maison Du Festival also houses the restaurant Blumenthal Montréal, a lovely bistro with a terrace. It is perfect for lunch, a pre-concert meal, or a late evening, post-show dinner. It features a delicious menu of dishes made from locally produced ingredients. Blumenthal Montréal is also a non-profit enterprise, with the proceeds going to fund the activities of the Maison Du Festival. 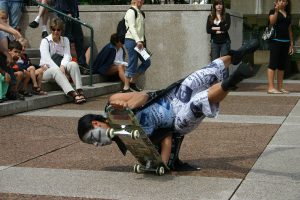 Festival itself a family-friendly endeavor, that includes the Rio Tinto Musical Park, which combines playtime and technology in imaginative musical installations. There will also be daily performances by La Petite École du Jazz (The Little School of Jazz) that will present a fun, interactive, bilingual jazz lesson featuring Les Zélèves, a vocal harmony group, and beloved blue Festival mascot Ste-Cat. There are parades, roaming street bands, acrobats, and costumed street performers throughout each day. 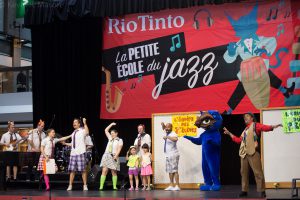 For over 25 years, the Festival has promoted initiatives in sustainable development, using organic cleaning products, biodegradable dishes and utensils, collecting rainwater, recycling, and purchasing about 90% of the food locally. The Festival has often been cited as a shining example of ecological responsibility, and has won several awards for the ongoing efforts to become greener every year.