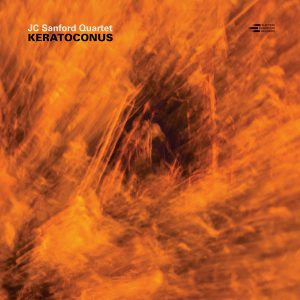 I had to learn a couple of things about JC Sanford before I could fully appreciate his 2019 release Keratoconus. For starters, Sanford is a funny man with a deadpan sense of humor. On the bandstand, he’ll share anecdotes about pyramid schemes, or a love for Billy Joel that was disapproved of by jazz school peers. He does so with a straight-face. It’s hilarious if you can catch his drift. When I realized Sanford was funny, it made me wonder about my relationship with trombonists. Are they funny? I thought back to my interactions. They seem to be serious people, seriously working their instrument. Have you ever tried to play a trombone? It’s impossible. Right now, I know I could hop behind the drums or piano, lacking technique, and trick at least 20 idiots on YouTube into believing I’m an avant-garde visionary. With a trombone, there’s no way I could trick anybody. The instrument demands way too much technical skill. So I thought these serious demands turn the instrument’s practitioners into serious people. But Sanford has made me question everything. When I thought about it, I realized that the trombonists I know are hilarious people. They’re always ready to share an irreverent laugh. This blend of sincerity and playfulness, of discipline and absurdity, finds tight expression in Sanford’s Keratoconus.

The record is more fun than it is funny. And it is fun because the music is well done. The quartet features Zacc Harris on guitar, Chris Bates on Bass, and JT Bates on drums. All three give strong supporting efforts across Sanford’s seven original compositions and one rendition of “All the Things You Are.” That said, I wish Sanford would have taken longer solos, and that he would have established his leadership as strongly in the improvisational mode as he does in the compositional mode. It runs just under 50 minutes. This is a good length for a record. One is able to hear its entirety in a single sitting without boredom, antsiness, or pretense. One is able to experience the work as a unified whole. How much would I have to trust a musician in order to give 80 continuous and voluntary minutes of my attention to their original compositions? An extraordinary but possible amount.

Luckily, Sanford packs a punch in Keratonconus and uses his 50 minutes effectively as composer and player. His compositions are precise and efficient. They get to the point. This sensibility might partly be explained by his big band experience, having cut his teeth with luminaries of the trade such as Bob Brookmeyer and Jim McNeely. There’s not much time for meandering claptrap in a well-oiled big band. The influence of a big-band sensibility on small-group compositions is an interesting idea to ponder. But, it’s unwise to place Sanford in a box. His record presents a diversity of styles articulated in a variety of feels. From rip-rolling rock riffs to mellow bossa novas to sardonic disco grooves, Sanford seems committed to the principle that thou shall “keep it bouncing.” A compositional high-point is achieved in “Robins in Snow.” The first 20 seconds reminded me of Le Voyage (Paul Motian’s best record as a leader). I then began to hear melodic fragments from standards such as “Monk’s Mood” and “Tune Up.” Not that they were there, necessarily, but I was hearing them. These associations are a good thing. It means Sanford is drinking from a deep well. “Robins in Snow” is supposed to make you hear things that are there, and not there. It’s supposed to contain many different elements, some clear, some murky.

As far as his playing abilities, JC Sanford appears to have no holes in his game. He can serve a pure melody and he can take bold risks. And he does it in a language that seems to be his own. It is easy to take for granted a trombonist who has mastered the instrument. The trombone’s tone emerges from a lower register. It is low-key, subdued, and distanced from the pyrotechnic range of its front-line collaborators. Do not let this fool you. Trombonists from Tricky Sam Nanton to J.J. Johnson to Melba Liston to Ray Anderson have been smoking fools since the Prohibition. I hear JC Sanford as a participant in this tradition.