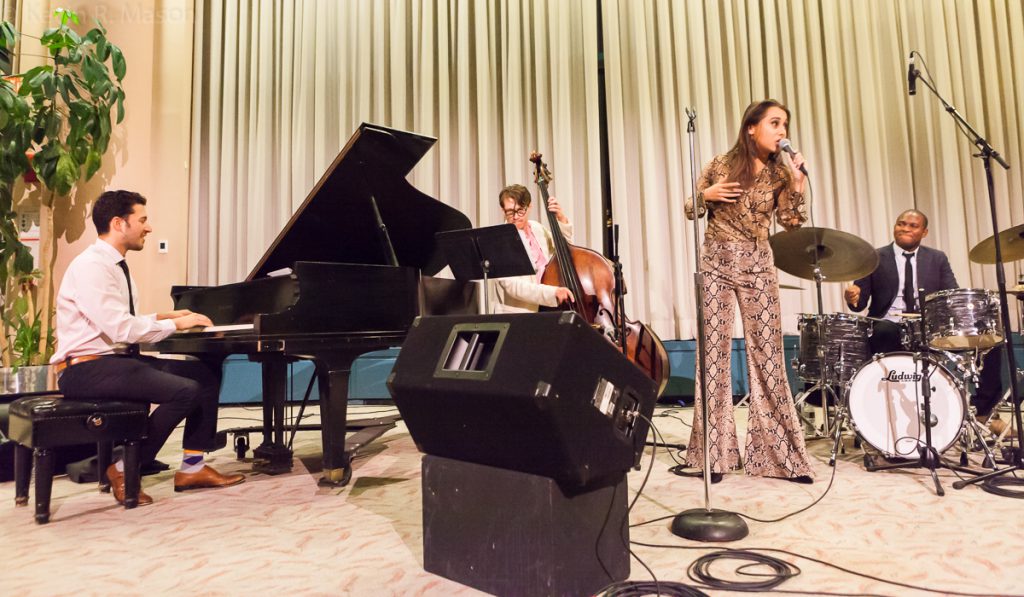 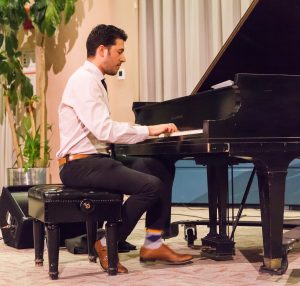 At only 29 years old, pianist/composer Emmet Cohen has already racked up some seriously impressive achievements. Cohen won both the American Jazz Pianists Competition and the Phillips Piano Competition. He was a finalist in the 2011 Thelonious Monk International Piano Competition, and the winner of the 2019 American Pianists Association’s Cole Porter Fellowship.  Cohen has appeared at numerous international jazz festivals, including Newport, New Orleans, Litchfield, Monterey, North Sea, Bern, Detroit, and Jerusalem. Emmet has performed at Birdland, Village Vanguard, Ronnie Scott’s, Blue Note, Dizzy’s Club Coca Cola, Lincoln Center’s Rose Hall, the Kennedy Center, and the 2014 Winter Olympics in Sochi Russia, and he was received in the Oval Office by President Obama. Cohen has also worked with accomplished choreographers Debbie Allen and Bill T. Jones. Committed to intergenerational collaborations, he has teamed with many legends in the jazz world, including Benny Golson, Tootie Heath, Jimmy Heath, Houston Person, and George Coleman. In addition to his other CDs, Cohen he has recorded two volumes so far of his “Masters Legacy Series” with drummer Jimmy Cobb and bassist Ron Carter. Cohen is quoted as saying, “Jazz is enriched immeasurably by connecting and studying with jazz masters, forging back to the very creation of the art form.”  He has also played in Christian McBride’s “Tip City” trio, and this is just a partial list of Emmet Cohen’s accomplishments. He is definitely a force to be reckoned with in jazz! 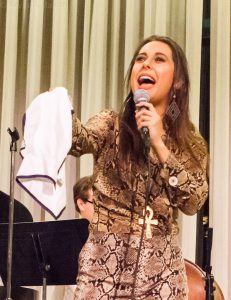 Vocalist Veronica Swift, at 25 years old, is already considered one of the top young jazz singers in the genre. She grew up on tour with her father, renowned jazz pianist Hod O’Brien and her mother, celebrated singer/educator/author Stephanie Nakasian. At only 11 years old, she took part in the “Women in Jazz” series at Dizzy’s Club Coca Cola. In 2015, she won 2nd place at the prestigious Thelonious Monk Jazz Competition. She has been a guest artist with both Wynton Marsalis and Michael Feinstein at Jazz at Lincoln Center. She has performed at the Montreal, Telluride, and Monterey Jazz Festivals. She’s toured with The Emmet Cohen Trio, and appeared with Benny Green, Chris Botti, Vince Giordano, Richie Cole, and Paquito D’Rivera, and she has had a residency at Birdland.

On drummer Bryan Carter’s website, it says the following: “Shortly after completing his training at The Juilliard School in New York City and still at the very outset of his career, Carter has already played and/or recorded with many notable artists including Clark Terry, McCoy Tyner, Wynton Marsalis, Marcus Roberts, Mulgrew Miller, Kenny Barron, Michael Feinstein and Kurt Elling. Carter attended The Juilliard School as a Jazz Studies major and studied with Carl Allen and Kenny Washington. He was the recipient of the Irene Diamond Scholarship as well as the Samuel L. Jackson Scholarship. While at Juilliard, Carter took a strong interest in composition, orchestration and interdivisional cross-collaborative performance. Bryan is currently touring the world with his band, “Bryan Carter & The Young Swangers”. He also served as the house drummer for NBC’S “Maya & Marty” starring Maya Rudolph, Keenan Thompson and Martin Short. The show has featured guests including Miley Cyrus, Tom Hanks, Drake, Steve Martin and Tina Fey. Aside from performing, Carter conducts clinics, master classes and workshops at schools, colleges and universities around the world. Currently, Carter serves as a teaching artist for the Jazz at Lincoln Center, “Jazz for Young People” program in New York City.”

Young bassist Joey Ranieri hails from Chicago. He has taken part in the 2019 Vail Jazz Workshop, and he began to seriously study bass in the eighth grade. He played at the 2018 Chicago Jazz Fest, and the Jazz Institute of Chicago’s “Jazz City: To Be or Not to Bop: Jon Faddis Celebrates Dizzy’s Centennial” in 2017. Working with The Emmet Cohen Trio predicts a bright future for the budding and talented bassist. 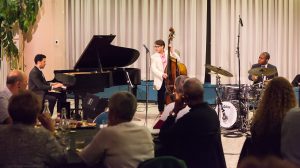 On Stage at Kingsborough’s Executive Director Anna Becker welcomed the crowd and discussed upcoming events in the 2019-2020 season. Then Anna brought The Emmet Cohen Trio to the stage area, and they started with “Buhaina, Buhaina” by Ray Brown, which began as a cool, laid-back, relaxing number, but morphed into an exciting up-tempo song by the end. The second song, “Braggin’ in Brass,” was high-energy, and displayed Cohen’s excellent piano chops to their best advantage. Then Emmet introduced his band members and told anecdotes about each of them. He has known Bryan Carter since they were teenagers, and he met Joey Ranieri when Ranieri was only 15. Early on, Joey kept insisting that one day he would perform with Emmet, and after hearing Joey play, Cohen agreed. Joey just turned 18, and Emmet said that although he had been accustomed to being the youngest one in the group, he laughingly noted that it has now changed. 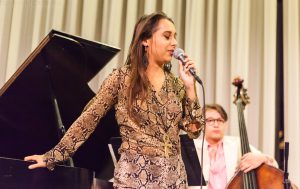 Then Cohen introduced vocalist Veronica Swift. The group performed a swinging “Goody Goody” and “How Lovely to be a Woman” from Bye, Bye Birdie. Veronica said her parents exposed her to all kinds of music when she was growing up, and one of her favorite shows was Oliver. Her favorite song from that show was “As Long as He Needs Me.” She didn’t fully understand as a child that it was a song about a woman exposing her vulnerabilities. Even though she considers herself a strong woman, she said, “We all have our vulnerable moments.” Her rendition of the song was full of tenderness. “Dat Dere” showcased Bryan Carter in a sprightly performance, and the other musicians were able to shine, too. 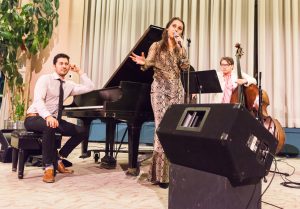 Veronica followed up with another of her favorites from a musical, “Money Makes the World Go ‘Round” from Cabaret, followed by “You’re Gonna Hear From Me” from the film, Inside Daisy Clover. She reminisced about moments from her childhood as an introduction to Mel Tormé’s “A Stranger in Town,” a beautiful, melancholy ballad that segued into a Latin-tinged “I Don’t Want to Cry Anymore.” Swift also talked about her experiences with Emmet Cohen, and thanked him for being such a great mentor, then they played a whimsical “I’m Hip.” Veronica introduced the song “Guess Who’s in Town,” once sung by Ethel Waters, and noted that even though she didn’t fully understand jazz as a child, the music of the 1920s was so fresh, it really got her attention. Swift said the song featured “our own stride daddy,” Emmet Cohen. Then Emmet and Veronica did a divine duet of “Someone to Watch Over Me.”  The show’s finale was a rapid-fire “Tea For Two” that was breathtaking in its pace, and it closed the concert on a high note! 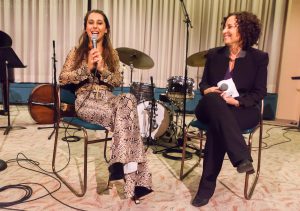 Following the concert, there was a Q & A session with Veronica Swift, hosted by Anna Becker. Veronica noted that she has always been writing all kinds of things, ever since she was a young child. She discussed some of her upcoming gigs, and she said that Wynton Marsalis has inspired her to think outside the box. On her CD, Confessions, she admitted that it was sometimes daunting to write the arrangements, but the songs themselves often just dropped into her lap, almost like fate. When asked whether young people will listen to jazz, she said there are already a lot of young people listening to jazz now. When they get older, their appreciation will grow. But she feels that jazz has earned its place, and there will always be an audience for the genre.

About On Stage at Kingsborough

“On Stage at Kingsborough’s mission is to bring artistically and culturally diverse, multi-disciplinary performances from masters of the form to the varied communities in and around the college. We strive to create an environment where the arts are an accessible and integral part of life, and a community gathering place for inspiration, conversation, and breathtaking performances.

Upcoming events include Tatiana Eva-Marie & the Avalon Jazz Band on February 14, as part of the “Jazz at the Lighthouse” series. On May 1, The Lighthouse will host  the show, Ty Stephens and (The) Souljaazz.

For more information about On Stage at Kingsborough, go to www.onstageatkingsborough.org.