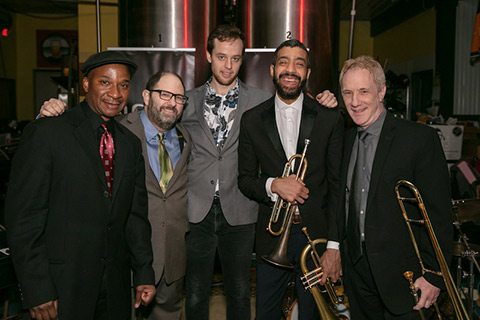 Good things have a way of sticking around. And few things are better than the music called hard bop which flourished roughly from 1955 to 1965.

Luckily for those of us in the Twin Cities, the music lives on here. It’s being played Wednesday nights at Boom Island Brewery in Minnetonka by the Minnesota Hard Bop Collective, a dynamic company of musicians led by drummer Jesse Simon. The weekly gig started late November and is scheduled to run through February (except Feb. 5). The gig is funded in part by a Minnesota Regional Arts Council grant.

I talked with Simon, listened to his band, and asked him about the music. “We really are a composer specific-series,” he said, “I’m interested in the work of composers such as Horace Silver, the Joe Henderson-Kenny Dorham connection, Wes Montgomery, Benny Golson.” 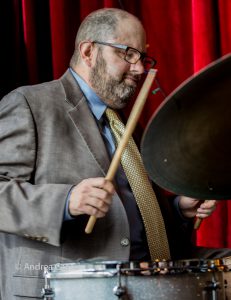 Simon’s commitment to hard bop repertoire is admirable. It comes out in his strong, swinging approach to the drums. He knows what he likes, he likes what he hears, and he goes for it. That energy rubs off on other musicians. One of the ideas behind the band, according to Simon, is “to give musicians a chance to really learn tunes that not everybody plays. It’s about a collection of musicians working to internalize this music.”

Last Wednesday, Simon started the second set with a Horace Silver tune entitled “Ecaroh.” It was a deep call. The tune is not regularly played. It was first recorded in 1952 by Silver’s trio with Curly Russell and Art Blakey. More famously, “Ecaroh” appears on Blakey’s 1956 record The Jazz Messengers, played by that sweet Mobley-Byrd frontline.

At Boom Island, Simon made the call to play “Ecaroah” whether the band knew the tune or not. So there was risk involved, but the band sounded great. And the audience enjoyed it. It was a reminder that jazz thrives on risk. Simon’s risk as a bandleader appears to be his pursuit of a genuine hard bop sound in a world that has mostly forgotten it.

“I was never a leader before 2016,” Simon explained. “Now, I look for musicians who have a certain swagger.” When Simon mentions “swagger,” he is indicating the quality that distinguishes hard bop from other styles. What is this quality? Swagger? Yes. Soul? Toughness? Earthiness? Though all are adequate descriptions of hard bop, the music is almost impossible to pin down. Its history comes from multiple directions. That’s part of the genius. 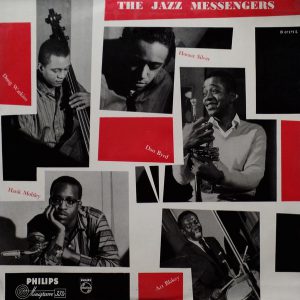 In the 1950s, hard bop musicians at once embraced and rejected the complexity of bebop and Charlie Parker’s innovations. The rejection gave way to a more diverse spectrum of personal expression (for example, Bud Powell gave way to Herbie Nichols.) The drums got louder. Think Blakey. Critic Kevin Whitehead notes that hard bop featured fewer Broadway tunes than bebop, and filled the gap with blues-based forms, church-inspired ideas, and original compositions. Think Eddie Harris, think Jimmy Smith, think jukeboxes playing Cannonball Adderley’s “Work Song” over and over again. What about the Sonny Rollins Trio? That could be its own sub-category. Who had a better eighth note than Sonny Clark? Who had a better eighth note than Lee Morgan?

There are details to this event called hard bop that require sorting. What we can say today with certainty: hard bop was driven by African-American musicians whose strong idiomatic developments distinguished the music from the mostly white, cool jazz that had been so popular in the preceding decade.

Simon’s insistent exploration of hard bop repertoire is a commitment to this special period in American music history. It’s a way of keeping the possibilities and the feeling of the music alive.  Also, more simply, it’s what Simon digs. “When I was in New York, people were direct. They were assertive about how they wanted the music to be.”

That assertiveness has come through in his structuring of the Minnesota Hard Bop Collective. Simon sticks to his vision and successfully collaborates with some of the area’s best musicians. Phil Aaron, Dave Graf, Omar Abdulkarim and Ted Olson are a few musicians among many, who have served in Simon’s group in recent years. Simon is an appreciative man and speaks highly of his cohorts. “Swinging isn’t just on the bandstand, you know. Jazz is a culture. How we relate to each other is a part of the music,” he told me. “That’s important to me.”

I talked with a few Wednesday night regulars at Boom Island and asked them about their experience. Bill Brown drives from Roseville to catch the Hard Bop Collective. “It’s the delicious beer, the great crowd, and the unique access to music” which keeps him coming back, he said. Dennis Tague, who frequented Boom Island’s jazz offerings at its previous Minneapolis location, put it in more simple terms: “I come here for jazz. I love jazz.”

But not everyone in the room was a listener, apparently. And it seems not everyone appreciated hard bop’s assertive expressions. As I was writing this piece, Simon shared emails from Boom Island’s General Manager Scott Becker. Becker wrote to Simon: “I spoke with many who were in attendance last Wednesday evening.  They all said the music was too loud to carry on a conversation and as a result several groups left.” I wanted to talk to Becker but he didn’t return my calls.

When people leave early it’s never good for business. But many people stayed that night, and the music was high-quality. (Boom Island has no cover charge. The musicians rely on tips for pay beyond the grant.) The conflict between art and profit strikes again. A key question is: Where is the line between performance music and background music?

In addition to the February Boom Island offerings, catch Simon and the Hard Bop crew Tuesdays 4:30-6:30 at Stacked Deck Brewing in St. Paul. For Simon, positive energy is a high priority. “What’s paramount is that I’m trying to make everybody happy. Like Clifford Brown says the music is a ‘Joy Spring.’ Everyone should feel good.”