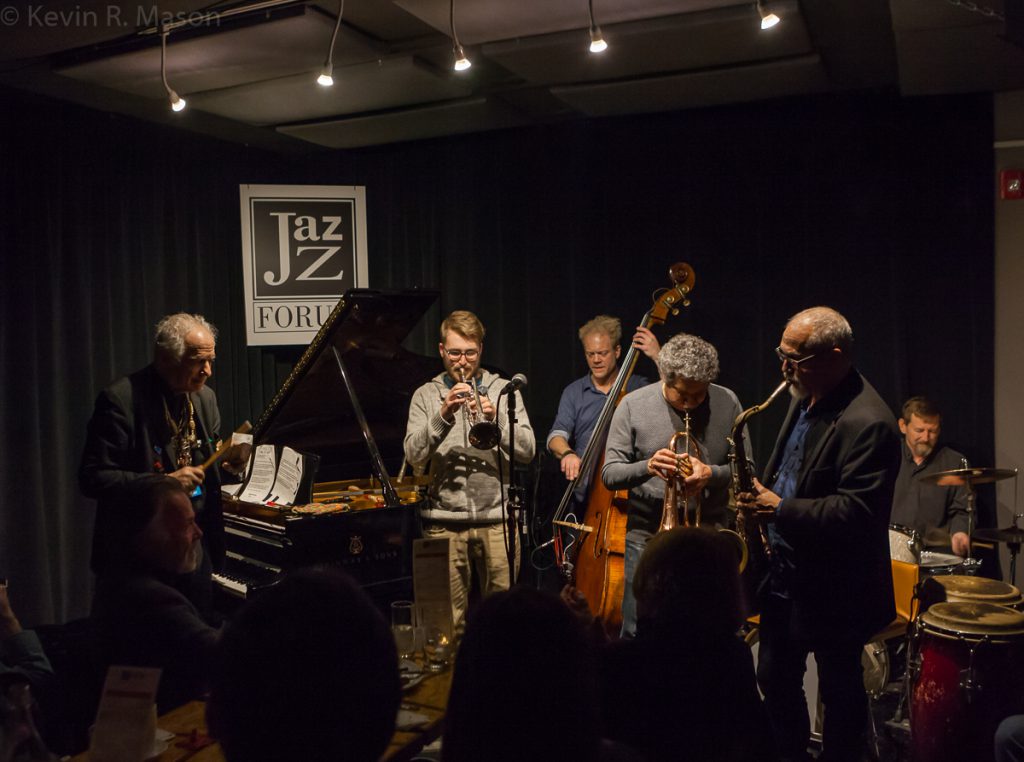 On November 16, 2019, multi-instrumentalist/composer David Amram celebrated his 89th birthday at the beautiful, intimate, art-filled Jazz Forum nightclub in Tarrytown, New York. Since opening in 2017, Jazz Forum has become established as the premier location for live jazz in Westchester County. Amram did two sets per night on both November 15 and 16. 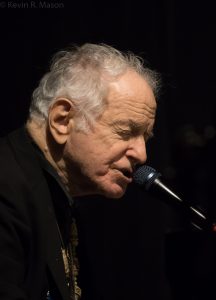 In David Amram’s long and distinguished career, he has collaborated with many great artists, including Leonard Bernstein, Thelonious Monk, Dizzy Gillespie, Mary Lou Williams, Pete Seeger, Betty Carter, Arlo Guthrie, and Jack Kerouac. Among his many notable achievements are his score for the 1961 film, Splendor in the Grass, and the timeless, unforgettable score of the 1962 film, The Manchurian Candidate. A world traveler, he has learned to play instruments from everywhere, and incorporate those instruments into his compositions and improvisational process. Amram is a gifted storyteller, recounting the events of his life and career with immaculate memory and fabulous wit. 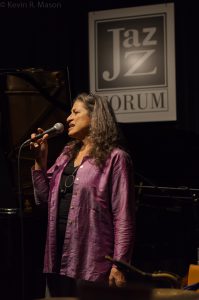 Club owner Mark Morganelli welcomed the crowd and discussed the amazing fact that this is his 41st year of presenting jazz in New York! He has had a long friendship with David Amram, and he has hosted many of Amram’s birthday celebrations. Co-owner and Morganelli’s wife, Ellen Prior, took the microphone and talked about sponsorship, the art endeavors they are involved in, as well as upcoming events at the club. Mark returned and introduced David Amram and his group. Amram spoke glowingly of his fellow musicians, drummer Kevin Twigg, bassist Rene Hart, saxophonist Erik Lawrence, David’s son Adam Amram on congas, and percussionist Elliott Pepper. Amram, who is quite vibrant and energetic at 89, said he couldn’t think of a better place to enjoy his birthday than “this great club in Hudson Valley.”

The concert started with a deliciously sprightly “Take the ‘A’ Train.” Amram switched with ease from piano to hand drum to flute to cowbell, all within the same song. When David is described as a multi-instrumentalist, it is no exaggeration! Then he talked about Phil Ochs, the controversial and troubled artist who had been characterized as a protest singer during his life. Ochs wrote “When I’m Gone,” and Amram very effectively and emotionally sang this song. 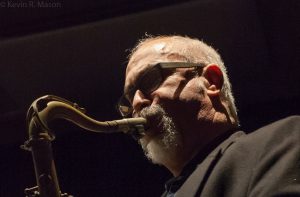 At one point, David quipped, “You’re only as old as you make other people feel!” The group followed with the standard, “Lover Man,” which featured a gorgeous solo by saxophonist Erik Lawrence, as well as a fine bass solo by Rene Hart. 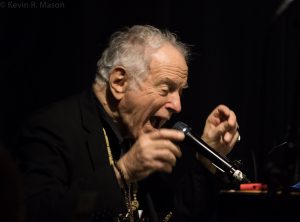 Amram talked about the state of the world, and said, “In this time of chaos and insanity, this club remains an oasis.” He also talked about collaborating with Jack Kerouac in Greenwich Village on the short film Pull My Daisy. He said that Kerouac became a celebrity, against his own wishes, but Amram insisted that Jack never changed. Along with Kerouac, the collaboration included Allen Ginsburg and Neal Cassady, a unique group of lyricists.  On the song of the same name as the film, “Pull My Daisy,” David charmingly gave a spoken word introduction to the song, then whimsically rapped/sang specially tailored lyrics for the occasion. 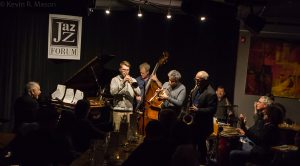 David Amram proves beyond a doubt that age is only a number. He performs with the style, verve, and energy of someone decades younger, and his joie de vivre is palpable. There are a few elder statesmen in jazz who have reached icon status and have become living legends, and Amram is definitely one of them! For the finale, he brought Mark Morganelli on flugelhorn and Alex Miller on ­­­­­­trumpet for an excerpt from the symphony that was composed by Amram, “En Memoria de Chano Pozo.” This piece was written in tribute to the late Cuban percussionist Chano Pozo, a singer, dancer, and composer who frequently collaborated with Dizzy Gillespie. 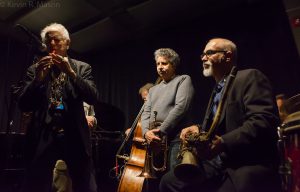 After a riveting performance of the song, in the spirit of generosity, Amram thanked everyone at the club, including the cooks, the bartenders, and everyone who supports the club. David’s birthday was actually on November 17, and the band finished just one hour before the date of his birth. It was a real party! 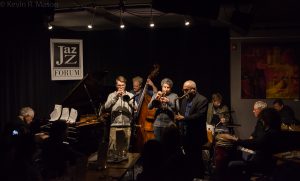 Before the encore, Amram talked about meeting Charlie Parker, and his great luck in being able to spend time with him.  The group played a dynamic version of Parker’s “Now’s the Time” with Jake Payne sitting in on the drums. The extraordinary talent that David Amram possesses is undiminished by time, and at his birthday celebration, it was his gift to the lucky audience at Jazz Forum.

For more information about upcoming events at Jazz Forum, go to: www.jazzforumarts.org.