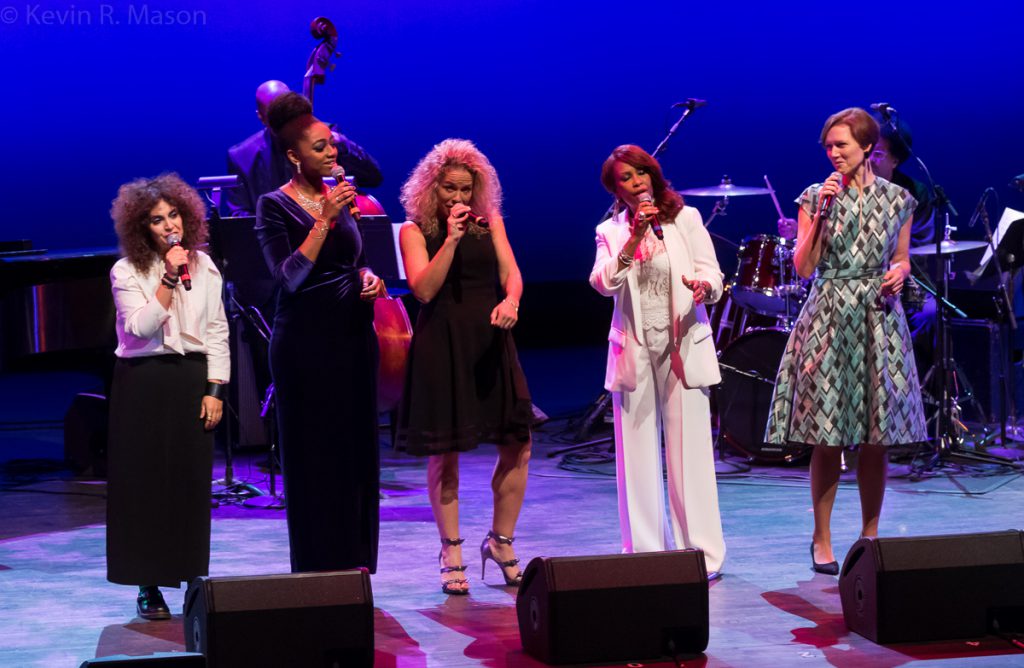 On Sunday, November 24, 2019, the 8th annual contest named after the legendary Sarah Vaughan, “The Divine One,” gave five vocalists an opportunity to compete for a $5,000 cash prize and a performance slot at the 2020 Newport Jazz Festival. Past winners and finalists include Cyrille Aimée, Jazzmeia Horn, Sinne Eeg, Oleg Akkuratov, Camille Thurman, Alexis Cole, Laurin Talese, Nicole Zuraitis, and Quiana Lynell, all of whom are making names for themselves with flourishing performing and recording careers.

There were submissions for the contest from 34 countries around the world, and the finalists for the 2019 SASSY Awards are as follows: Daniela Spalletta, who was born in Sicily, is considered one of Italy’s premier jazz singers. She has won several international jazz awards. Her debut album, D Birth, garnered excellent reviews and multiple awards.

Born and raised in the Castle Hill section of the Bronx, Samara McLendon is a rising star. Although she is new to the jazz scene, she has already performed at Dizzy’s Coca Cola Club, Mezzrow Jazz Club, and Blue Note Jazz Club. True to her roots, she still volunteers in the music department of World Changers Church.

Christine Fawson is both a jazz singer and a trumpet player. Originally from Northern California, Christine has been a member of the brass faculty at Berklee College of Music for 14 years. She has played trumpet with the DIVA Jazz Orchestra, and she was a vocalist at Lincoln Center’s 2016 Ella Wishes You a Swinging Christmas tribute.

Lithuanian-born, Paris-based Viktorija Gečytė started her performance career as a child actor on television. She spent time on the New York jazz scene before settling in Paris, France and performing internationally. For the past two summers, “Vik” (her preferred nickname) has been a guest vocalist with the Frankfurt Radio Big Band open-air concerts in Germany.

Vivian Sessoms was born into a musical family, with a mother who was a session/jingle singer, and a father who was a flutist/percussionist with James Brown and others. As a teenager, she started composing her own music. Today, along with her musical partner, multi-instrumentalist Chris Parks, she is half of the group Albright, and the duo has released two CDs, Sunny One Day and Life. 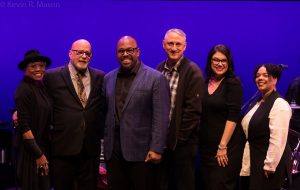 The judges for the competition were Christian McBride, bassist and radio host; Monifa Brown, WBGO Radio personality; Matt Pierson, music producer; Jane Monheit, vocalist; and Dee Dee Bridgewater, NEA Jazz Master and vocalist. Gary Walker of WBGO Radio was the host of the competition. He has been a judge in the past, and now he has taken over from previous host Rhonda Hamilton, who moved out west. 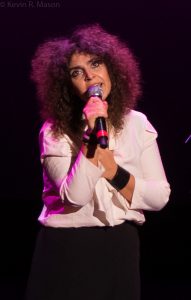 The singers were backed by drummer Buddy Williams, bassist Gregory M. Jones, and Musical Director/pianist Sergio Salvatore. There were short videos that introduced each vocalist before their performance. On her video, Daniela Spalletta said, “Performing on stage is always a great, emotional experience. Performing is the most beautiful part of our journey – because we get to communicate with the audience.” Daniela started her performance a cappella, displaying a lovely, lyrical, multi-octave voice and some excellent scatting on ‘Everybody’s Song But My Own” and “Stella By Starlight.” 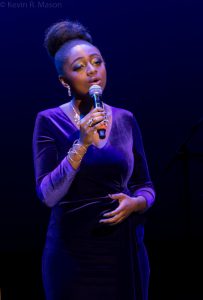 On Samara McClendon’s video, she said, “Music has been in my family for a long time. My earliest memory is of Thanksgiving. After the meal, we’d all gather around the piano and sing.” Samara cites Ella Fitzgerald and Sarah Vaughan as big influences on her. She performed “Sophisticated Lady” in a rich, smoky voice. She followed with another Duke Ellington tune, “Perdido,” where she scatted with style and ease. Her performance was so good that the audience broke into spontaneous applause in the middle of the song. 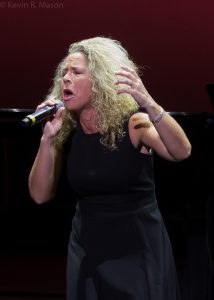 Christine Fawson stated on her video, “I can’t remember my life without music…My job is not only to entertain, but also to tell a story. I love to perform, to connect with the audience, and then the musicians.” Christine is a bundle of energy on stage, and her enthusiasm is palpable. She started with “My Heart Stood Still.” Since she is also a trumpet player, many of the songs she sings are inspired by trumpet players. “It Never Entered My Mind” was inspired by Miles Davis’ version, and she sang it with a lot of emotion.

Vik Gečytė’s video had her quoted as saying, “Music chose me. It’s about the connection. Sarah brought a great sophistication to music and had such a wonderful rapport with her musicians.” Her first song was “Destination Moon,” which she rendered with a self-assured flair. Then she followed up with one of her favorite songs, “Angel Face,” which was written by Hank Jones with lyrics by Abbey Lincoln. It was a beautifully romantic ballad. 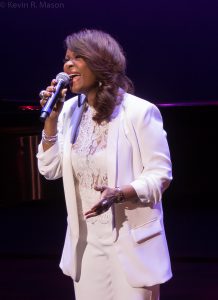 Vivian Sessoms said in her video, “I never wanted to do anything but music. Something special happens when everything goes well, and the audience is attentive. Sarah Vaughan laid out a blueprint for all the singers that followed her. This is a dream come true to perform here at NJPAC.” On “Love For Sale,” Vivian brought a lot of energy, and on Hoagy Carmichael’s “Stardust,” her voice and storytelling skills were beguilingly presented.

After the finalists did their first performances, there was a video tribute to the life and extraordinary career of Sarah Vaughan. After the video, each of the finalists came out and did one more song. Daniela Spalletta sang “The Road to You,” and she wrote the lyrics for the vocalese song. Samara McLendon performed an affecting ballad about autumn. Christine Fawson said she was going to pay tribute to the great Dizzy Gillespie on “A Night in Tunisia,” where she dynamically scatted and danced all over the stage during her performance. Vik Gečytė sang a Cole Porter classic, “Night and Day” and she seemed completely relaxed on stage. Vivian Sessoms performed a very powerful and evocative “At Last” that resulted in a standing ovation at the end. 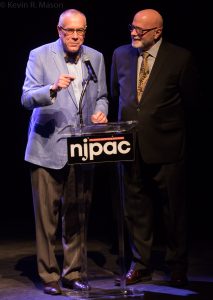 Gary Walker said that the judges had their work cut out for them, and that was certainly true, because all the finalists were quite talented. After a 20-minute intermission, Walker thanked the sponsors and all those who helped put together this event. Then President and CEO of NJPAC John Schreiber took the microphone. He gave a shout-out to Newport Jazz Festival’s George Wein, who was his mentor. Schreiber was Sarah Vaughan’s road manager for a time, and he related a couple of interesting stories about that experience. He also updated the audience about the careers of the previous winners and finalists of The SASSY Awards. Shreiber spoke about how many of the winners and participants have been featured in the media, and have been performing all over the world. 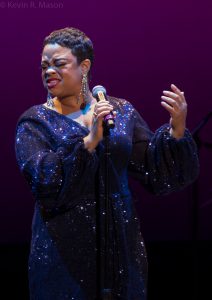 Then, he introduced James Moody’s widow, Linda Moody, from the audience, and called her “The Godmother of the Festival.” He brought the 2018 winner of The SASSY Awards, Laurin Talese, on stage. She just returned from China, and she performed a delightful, syncopated song that enchanted the crowd. She quipped that it was a lot less pressure standing on that stage than it had been the previous year. She also sang “Where Do I Belong?” and amply displayed the chops that won her the 2018 competition. 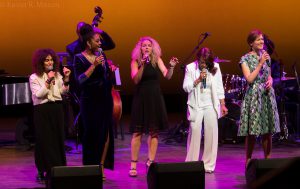 Gary Walker brought all the finalists on stage, and they sang a medley of songs that were made famous by Sarah Vaughan that included “Lullaby of Birdland,” “Misty,” “Brokenhearted Melody,” “Tenderly,” and “Just Friends.” This is always one of the highlights of the competition, and this time was no exception. The ladies sang, swooped, and scatted their hearts out! It was a fitting final performance of this stellar competition. 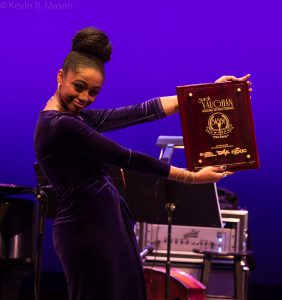 When the judges’ choices were announced, it was Viktorija Gečytė as 2nd runner-up, Daniela Spalletta as 1st runner-up, and the first-place winner was Samara McLendon! 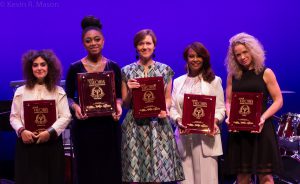 It was a tough, tight competition, and these vocalists showed that the future of vocal jazz is in good hands. They are worthy successors to the legacy of Newark native and music icon, Sarah Vaughan. 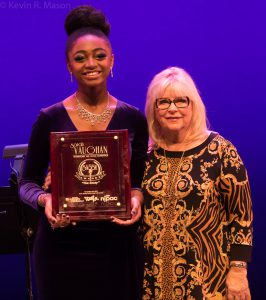