The Divine and the Sublime: Kamasi Washington, Fred Hersch in San Francisco 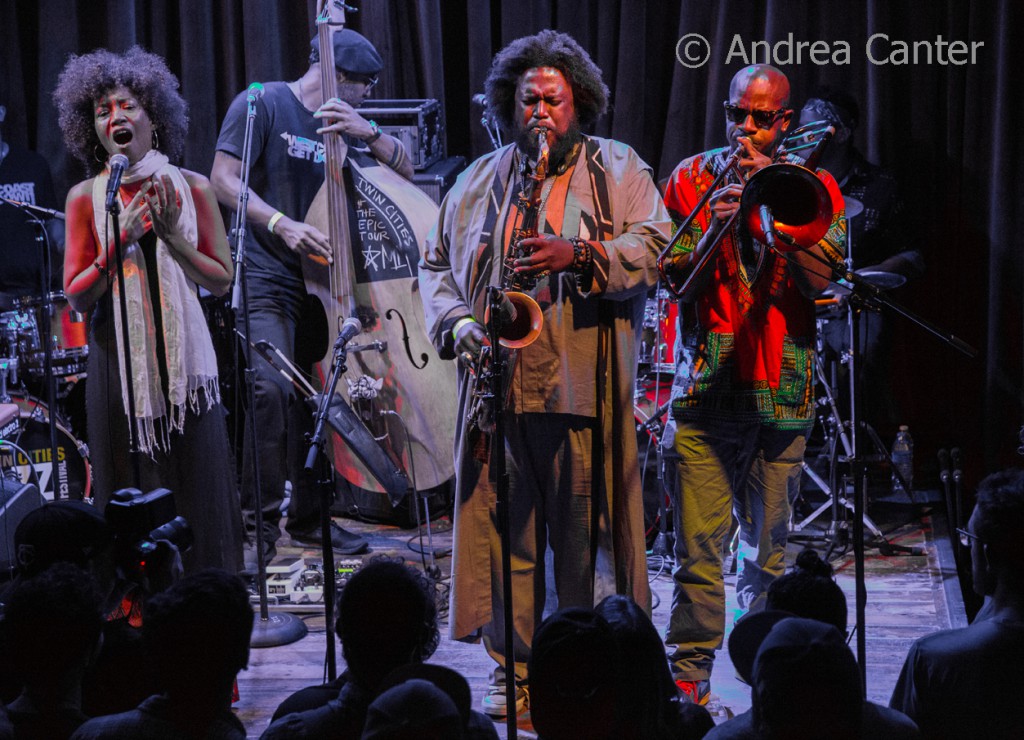 There is an old axiom in music: Jazz is “the sound of surprise.” That surprise certainly rang true for this listener at two recent shows in San Francisco. The first was the band led by Kamasi Washington at the club, the Independent, on February 25th. The second was the trio performance by Fred Hersch at the newly renovated Herbst Theater at Civic Center on February 27th. The two shows were in different neighborhoods. The Independent is on Divisadero Street, once a bleak strip of shops and bars leading to the upper crust Pacific Heights and tony Marina District. In a very short time, this area has quickly changed, with bars, restaurants and street traffic of the youth set taking over. Just down the street is the cultural center of the city, with the symphony, opera, ballet, and the recently built SFJAZZ Center prominently facing City Hall.  Just past these buildings is the beautiful, reconditioned Herbst. This, and the downtown axis of the soon-to-reopen San Francisco Museum of Modern Art, right across from the Yerba Buena Art Center, makes San Francisco one of the greatest cities in the world for art of all kinds. 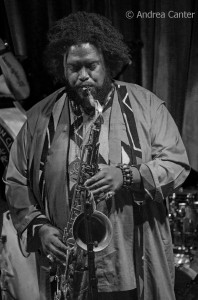 Kamasi Washington played last summer at the San Jose Jazz Festival. But this recent performance appeared to be his first engagement in the City.  The buzz about his playing and band was in the air, with quite a bit written about his new three-CD set, The Epic (released last May on the Brainfeeder label).  Waiting outside in the cold street, I realized that there are just not that many clubs presenting jazz, improvised music, or even music by our African American, Asian American and Latin American brothers and sisters. But at least some clubs are still around, and the listeners are certainly there to sell-out two shows (I was at the later one) months in advance at the one jazz presentation at the Noise Pop Festival. This event celebrated its 20th anniversary back in 2012, and has included film, art shows, happy hours and other social events, and from what I saw standing outside, a very active and fun volunteer group for young people that want to meet and greet the audience and musicians.

As I entered the club, I saw the one seat I was looking for (most patrons stand for the entire set), and got settled in for some very appropriate and rocking DJ music, including my favorite cut of all time, Gil Scott-Heron’s “Lady Day John Coltrane” from the album, The Revolution Begins. With this song spinning in my head, I knew I was in for a great night in one of the most comfortable music venues on the West Coast, with clean bathrooms, a terrific sound system, a very advanced light show, and a vibe that reminds us of the great Avalon Ballroom back in the day. Last year we saw the Esperanza Spalding show (May 6, 2015) titled “Emily’s D+EVOLUTION.” A couple of people walked out, expecting Spalding to do her straight jazz show. Instead she appeared with long braids, an electric guitar, and an original rock show that had the large contingent of young men in the audience glued in place. The very idea that Esperanza, showered with awards and acclaim, who could be playing concert halls around the world, was set up in a neighborhood rock hall (even a really nice one), was refreshing, revealing and shocking in its own way. 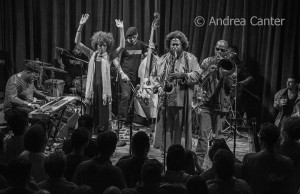 The music Kamasi played reverberated with a lot of influences, but it became clear that performing and creating in a community of musicians was primary to his approach. And this was reflective of an idea that emerged with John Coltrane when he began to play with Pharoah Sanders, Alice Coltrane, Jimmy Garrison, Rashied Ali and Emanuel Rahim, as captured in the 1966 recording, Live at the Village Vanguard Again. But Kamasi is not playing the Coltrane song book or even copying or necessarily studying this type of music.  He is bringing to the show a family of players, most of whom he has known from childhood.  The group for the Independent show was a scaled-down version of the 29- member ensemble at Club Nokia in the LA area on Decvember 10, 2015. Washington performed “Change of the Guard,” “Oscalyso,” the Oscar Pettiford cover, “Henrietta Our Hero,” “Final Thought,” and “Malcolm’s Theme” (listed from the early show, which was repeated in set two). Whatever Kamasi’s ultimate direction, one could not deny the wonderful connection he is establishing with the younger set of listeners, who together with some jazz veterans, had a night to remember. 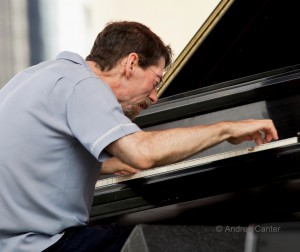 Across town, in the cultural environs of Civic Center, a very different concert occurred with the brilliant Fred Hersh Trio on February 27. Fred, together with John Herbert on bass and Eric McPherson on drums, has an intense and floating style that pulls from the entire history of piano trio groups. But the influence of Bill Evans is definitely in the room with Fred, like Coltrane with Kamasi. But with Hersch, the influences are not direct, not obvious. Fred has distinguished himself as a soloist, and was the first pianist in the history of the Village Vanguard to play solo in this setting. With a few exceptions, Evans stuck to the trio format. Hersch has an extensive library of original compositions, more than seventy according to his Wikipedia biography. But when his current trio settles in there is the same kind of intensity and color that the big brash band of Kamasi Washington achieves–but it is coming from the exact other end of the jazz spectrum. What other jazz trio has ever played with such a delicate, crystal-like beauty? What other jazz artist has ever delivered such emotional depth with a level of technical playing that seems delivered from the firmament? 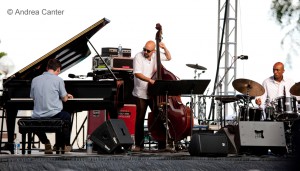 Hersch opened with “Whirl,” an original dedicated to the ballet dancer, Suzanne Farrell. He followed with another original, “Dream of Monk.” He then played “Nardis,” “Lonely Woman,” a second Ornette Coleman piece, “Forerunner,” “Moon and Sand,” a piece from his Walt Whitman series, “The Close of the Day,” “Change Partners,” “The Song Is You,” Monk’s “Think of One,” and an encore, “Valentine.”

A musician acquaintance of mine reported through Facebook that she left this show “in tears.” As we enter 2016, there is a distinct feeling in the air that a new energy of performance is on the horizon. With these two shows kicking things off, we certainly hope this is so.