Home » Recordings » TCJF » You are reading » 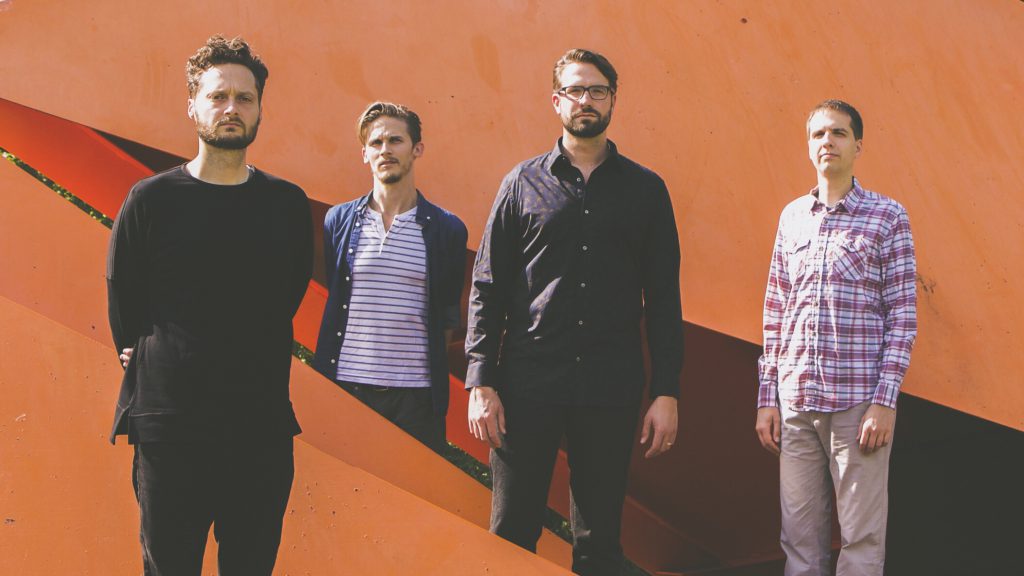 I am on my fourth time listening through Koplant No’s new album Elker. I’m loving every minute of it.

I’ve been listening to Koplant for six or seven years now. The first time I heard them was at one of their shows at the Artists Quarter (…shed a tear for the AQ). Having met at the University of Iowa, the members of Koplant No have continued to make music, tour, and release albums for more than a decade.

Their unique sound immediately drew me in. Visually, it was like I was looking at another standard jazz quintet with trumpet and tenor on the front line. Sonically? As soon as their music hit my ears I was transported to another place. Koplant No’s sound is unique, yet oddly familiar, comforting even. Their blend of electronic and acoustic instruments is organic. Beat tracks and samples weave in and out of the tunes while the horns play consonant but twisted melodies. At times reminiscent of some of my favorite two horn writers, Koplant No’s music maintains a personality all its own. 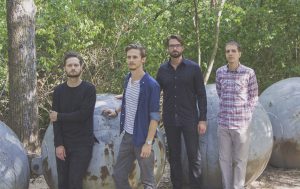 Elker delivers. The album opens with electronics. Beats and samples are met with drums and trumpet slowly fading in to the mix. “Before We Go” acts as an introduction to the record, setting the tone for what’s to come. It features a lone Brian Lewis Smith on trumpet. I’ve admired Brian’s approach to music making, particularly on his horn, for a long time. Capable of spinning 16th note lines with the best of them, he can also play the simplest of melodies with conviction that it makes your heart hurt.

“Elegy for Truth” opens with a string sample [edit: the strings are real! They are played by the Zafira Quartet from Saint Louis, MO. Strings were arranged by saxophonist, Joel Vanderheyden] that I feel like I’ve heard before, but I can’t place. There’s that oddly familiar feeling again. Clean harmon muted trumpet and tenor sax play swirling counter melodies to open the tune. Is that acoustic bass I hear? A warm sound complimenting the string samples perfectly. Good call. The tune breaks down to a vibes melody, played by drummer Rob Baner, that is looped and taken over by the horns. This simple, warming melody continues as Joel Vaderheyden plays a blistering tenor solo, which propels the tune to a climax and ultimately it’s close.

By this point, I’m hooked. All the way in, ready for what comes next. 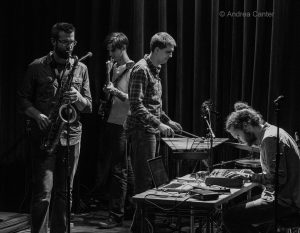 The title track starts with a more open sound than the previous two tracks. Electric bass plays a looped groove and is joined by drums. Just bass drum and cross stick. The snare sounds extra loose on the cross stick strikes. I’m digging that sound. Joel enters with a melody I recognize. I pause the track and sing it back to myself. “Where have I heard that before?” Nowhere. Familiar. It’s a gift when musicians making modern creative music can make a listener feel like they’re hearing something they know. The groove ends, sending the band in to outer space for a bit. Brian makes some sounds on his horn. Airy, vibey. Drew Morton creates a bed with his electric bass. A groove slowly re-enters while the tune builds to a climax, ambient horns floating over the top. The sounds of Brian’s horn, and some electronics bring us home. 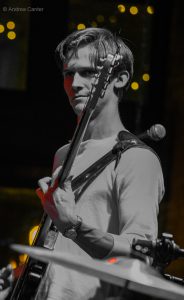 “Knock Knock Ghost” is a much more track and beat-driven tune from the get-go. It wakes up my ears after the title track invited them to sit back and relax. Now I feel like doing something. I should hit the gym. Tenor and trumpet trade solos over this infectious groove. I’m bobbing my head and my foot is slamming against the ground as I listen. I’m in a hotel room. Hope I’m not bothering the people in the room below me. Can’t help it. Electric bass solo! Drew kills it blowing over the beat track and drum groove. Track over. I want more bass solos now. In case you’re wondering who did the album art for Elker, it turns out bass is not Drew Morton’s only skill.

“Humpty Trumpty.” Do I even try and touch that title? Humpty Trumpty sat on a wall…I’ll let you figure that one out. A faster tempo now, but contrasted by long, flowing horn melody lines. Melancholy. Brian Lewis Smith plays a trumpet solo. It sounds like he’s using bucket mute, but with the array of effects at his disposal, it’s hard to say. Joel takes a solo. More emotionally engaging horn melodies that ramp up to finish the tune. I look up the Humpty Dumpty nursery rhyme because I can’t remember how it goes. Oh yeah, Humpty Trumpty had a great fall…hmm. 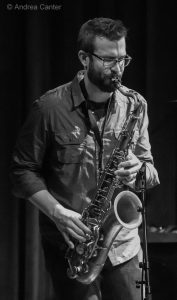 “Airways” chills out the vibe again. The pacing of the album is perfect. Every time my ears need a change, Koplant changes the energy. Just a pad opens the tune, and then a twisted bass loop enters to give the tune its harmonic information. Trumpet and tenor enter with a melody heavily altered by pedals. The range of sounds Koplant No is able to cover masterfully is impressive. Again, they loop a melody line for someone to blow over. This time, it’s Brian looping the melody on trumpet, and Joel taking a solo using an effect that sounds like an organ pedal a guitar player friend of mine used to use. Tinny, harmonized. I’m digging the vibe. 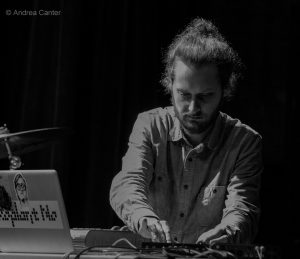 “Cherrie Pie” is by far the most hip-hop influenced groove so far. I half expected to hear a guest rap over this beat before I heard tenor sax enter to play a melody. Or is he improvising? One of the things I love about this music is that it’s hard to tell which is which sometimes. That speaks to the creativity of the writing, but also the melodic intuitions of the improvisers. And woe! Our hip hop beat is gone and we’re in to something else all together. Now here’s the tenor solo we were looking for. The second half of Cherrie Pie is maybe the most like a standard modern jazz tune. Fewer electronics save for maybe synth bass and a faint track. There are some breaks where you can really hear the track and in other spots it’s buried by a winding tenor solo. The tune continues to develop. As soon as you think you know what is coming next, Koplant No gives you something new. A rhythmic cell keeps coming back and ultimately is used to end the tune. 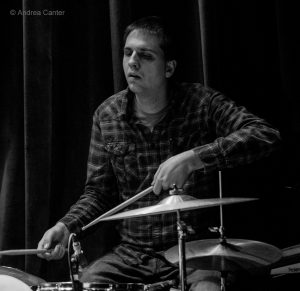 “The Divided” opens with a simple rhythmic track and bass. Another politically charged title? Hard to say, but also hard not to recognize our division in the age of social media echo-chambers. I like how Koplant continues to thin out the textures at the top of a tune to give my ears a chance to re-engage with the music. It draws me in. The clickety clack sounds a little like horse hooves on pavement. The band enters with horn melodies and the drums switch to a march-like snare drum groove. Drums, bass, and tenor all make their voices heard during the trumpet solo, sneaking in and out and helping bring the solo to a climax. Brian weaves in and out of the key center making my jazz stank face come to the fore. If anyone is watching me listen to this music, they must think I’m smelling something funny. The band wraps back around to the clickety clacks for a tenor solo. Joel also weaves in and out harmonically, creating and releasing a pleasing amount of tension. A rocking melody takes over and I’m bobbing my head again…and woe! Outer space! An emotionally charged free improvisation takes over, and is used as a transition back to a softer melody played over those same clickety clacks. Were those string samples during the free improvisation from some weird classical piece? Sounds like it. Cool. The tune studio fades bringing the album to a satisfying close.

Friendly Jazz Police PSA: Buy music that you love. Stream it all you want, but go buy it, too. A hard copy, vinyl, a digital download…when you buy your music, the artists you love get some money in return for making their great music. They do not get paid when you stream. Seriously. Go spend $10 or $20. Support the musicians you love! 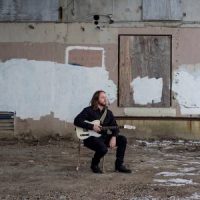 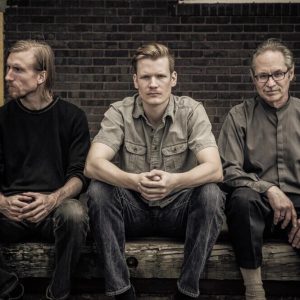 Off to the Races: An Interview With Drummer and Bandleader Rodney Ruckus