There is no question that there are great women players in jazz. And a recent series of shows in the Bay Area not only emphasized this fact, but left many yearning for more. Despite some progress in the scope of prominent women players active in the music, there still remains the situation of deep gaps in their numbers across the board in management, production, education and festival activity. That said, the following artists not only recently produced and participated in outstanding shows, but may hold the key to the future of women in the music. The also presented some of the greatest performances we have seen this year, including several from the SFJAZZ series honoring Women’s History Month. 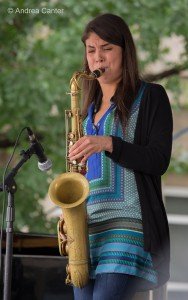 Melissa Aldana, 27, originally from Santiago, Chile, is a tenor saxophone player with a pedigree and a sterling resume. She won the Thelonious Monk Saxophone Competition in 2013 and completed a course of study at the Berkelee College of Music. She has a new CD, Back Home, on the Wommusic label. She performed at SFJAZZ on March 10, accompanied by Allan Mednard on drums and fellow Chilean Pablo Menares on bass (Jochem Rueckert plays drums on the new CD). The music is classic sax trio, a format that was made famous so many years ago by a couple of recordings by Sonny Rollins. And Aldana certainly draws on that inspiration, but avoids copying or even referring to that angular style directly. Instead, she plays a fluid, churning and powerful rendition of originals and standards, such as Kurt Weill’s “My Ship” and the original “Eminem.” This is the kind of group that sets the standard for you jazz artists. There is a element of artistry that she already demonstrates that is very impressive and beguiling. She is in no rush to overwhelm audiences with flurries of notes, fireworks, or explosions of sound. There is a flute-like method and clarity to her playing. 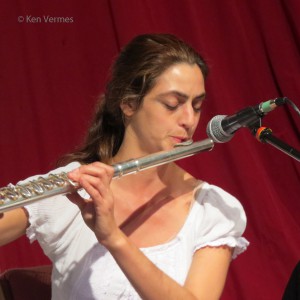 Speaking of flute, there is no one playing that instrument in the San Francisco Bay who has more facility than Rebecca Kleinmann. On March 19th, she performed at the Red Poppy Art House in the Mission area of San Francisco, in a trio that included vocalist Sandy Cressman and guitarist Ian Faquini. Cressman has been a stand-out singer with Latin-tinged groups for many years. Faquini, a Brazilian who lives in Berkeley, California, began working with the Brazillian songwriter Guinga at the young age of 15. The Red Poppy was a perfect setting for this intimate and completely absorbing music. They played a large selection of Guinga’s tunes and originals by Faquini. A jam session-like duet featuring Rebecca, titled, “D Minor”, set the standard for the night, with a blistering flow of notes and rhythmic perfection that was no less than stunning. Cressman, who had very little time to prepare for the show, also demonstrated a fantastic facility with the rich and complex poetry of Guinga and Faquini. As each tune was played, it became very obvious to this listener that what was taking place was a unique and almost miraculous invention of a musical experience that may be common in Brazil, but is very rare outside of that country. What was presented was a concert of the house, of the heart, a love fest of music that overflows with beauty and generosity for listeners. In other words, this was a feast of Brazillian soul from the center of that country’s spirit, from one of the most fascinating musical traditions on earth. And it was a showcase of mastery and perfection that few players in the world, of any genre, can play with such encompassing magic and delight. 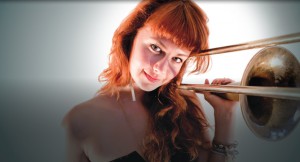 In regards to Sandy Cressman, she is not only a titan of Latin music, but produced a wonderfully musical daughter, Natalie, who performed at the SFJAZZ Joe Henderson lab on March 3. Billed as a tribute to Melba Liston, trombonist Natalie’s band included trumpeter Erik Jekabson, pianist Colin Hogan, bassist Tommy Folen, and drummer Eric Garland. This, like the Guinga tribute, was an overflowing presentation of the art and style of a great musician, Melba Liston. The band performed “Mischevious Lady,” “Melba’s Mood,” “Just Waiting,” “You Don’t Say,” “African Lady,” (from the Uhuru Africa album by Randy Weston), and the “Volcano Blues.” It was obvious from the first notes of this show that Natalie was thrilled to be featuring this music by one of the few women trombonists in jazz. In an interview by writer Andrew Gilbert, Cressman stated that, “Reading about Melba was like discovering a long lost sister. I loved her no-nonsense attitude. She walked into a room and blew them away with her writing and playing.” Natalie gave plenty of room for Jekabson to play on the tunes. And the whole band, which probably had only limited rehearsal time, sparkled with a swinging restraint of great maturity and style. 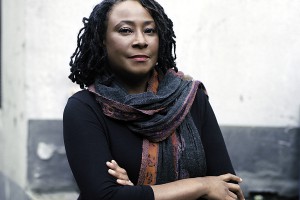 That’s What She Said: Songs By and About Women (March 23, SFJAZZ Joe Henderson Lab)

Lastly on March 23, again at the Joe Henderson Lab at SFJAZZ, we saw the last of four classes titled, “That’s What She Said: Songs By and About Women.” The class was hosted and produced by SFJAZZ Education Director Rebeca Mauleon. Geri Allen sat at the piano with an all-woman rhythm section including Ruth Davis on bass and Ruthie Price on drums. Allen performed a song for Alice Coltrane, a piece titled “When Music Is in the Air,” and “One-Handed Reach.” In between her compositions was a very interesting slide/video show that featured known and some little known women jazz performers. A number of the clips were truly incredible examples of artistry and performance. There was a brief question and answer period, and a moment to say hello to Geri. This was a perfect way to end our March “Women in Jazz Festival” of shows.

The question becomes, what’s next? How can the existing and the new generation of women players expand their numbers and their engagement at all levels of the music and business of jazz? Only time will tell if this beginning of a new century is a beginning or more of the status quo.